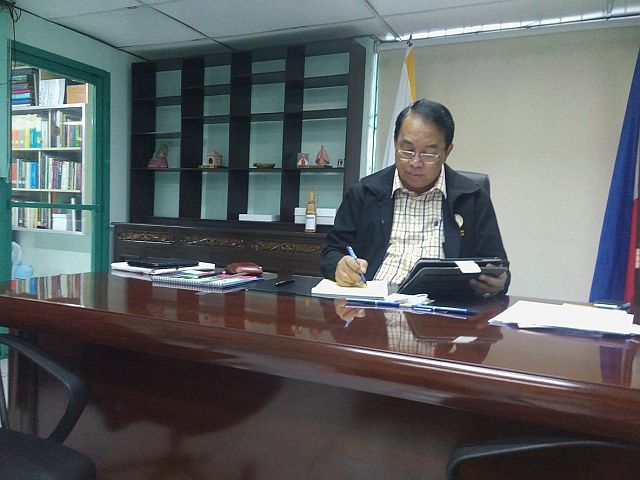 Chan in his office at DOT-7.

Emerging destinations in Negros Oriental and Siquijor can expect a boost in visitor arrivals as the new Central Visayas Tourism chief is bent to focus on these areas under his tenure.

“What we want is to elevate the tourism industry in the region to a level that is equal across all provinces,” he told Cebu Daily News on Thursday.

Chan said with the help of LGUs, the DOT could organize travel and tour exhibits to promote these destinations to the domestic market.

This was what he did when he was Tourism chief of Northern Mindanao where he organized the annual “Pasundayag sa Northern Mindanao,” a promotional event showcasing the best of the region’s destinations, attractions, arts and crafts amenities, and facilities.

Among the places where the event was held were Manila, Iloilo, Pampanga and Baguio City.

He said he will also tap LGUs to market individual towns more, aside from promoting whole provinces.

“The DOT doesn’t have the funds for more specific marketing. That is why we go to LGUs for help,” said Chan.

While he said his focus will be on emerging destinations in the region, he will still sustain and enhance the growth of the more established provinces of Cebu and Bohol.

Based on a DOT-7 report, Central Visayas welcomed a total of 3.16 million tourists within the first seven months of the year.

Data used were from tourism establishments across the region.
At 2.3 million, Cebu comprised the bulk of regional tourism arrivals, followed by Bohol at 402,246; Negros Oriental at 402,405; and Siquijor at 54,788.

Chan also said that he would lobby for improved connectivity, whether by sea or air, in the region.

Furthermore, he said he would be pushing for food tourism when marketing tourist accommodations in Central Visayas.

He said food, especially that which is unique in each province, must always be included in promotions.

“The culinary experience is an important part of tourism. Whenever visitors come to a place, the first thing they ask about is the food,” he said.

Chan said he was looking forward to Cebu hosting the Miss Universe pageant’s swimsuit tilt as well as meetings for the Asean Summit in 2017.

“Definitely, Cebu will be promoted all over the world. Only a few destinations are selected, so it will show that the province is one of the best places in the country to visit,” he said.

He said hospitality of the Cebuanos is guaranteed to give lasting memories to visiting delegates.

“When they go back to their countries of origin, they will surely recommend our destinations due to the wonderful experiences they had here,” he said.

Chan was appointed as director of DOT-10 in 2005 and reappointed by then president Benigno Aquino III in September 2010.