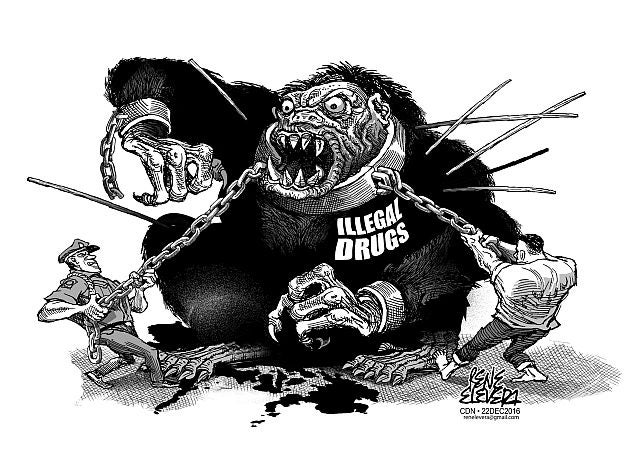 The arrests of Jeffrey “Jaguar” Diaz’s trusted aide Joselito Arellano, the two other men accused of selling two large packs of shabu worth P29 million wrapped in a paper bag, and two women selling shabu in Barangay Mabolo, Cebu City last week are undoubtedly major victories in the seemingly never-ending war on illegal drugs in this part of the country.

But they underscore the simple, obviously painful, but persistent fact that until there is mass poverty, when government has failed to find ways to provide livelihood to its constituents, the sale of illegal drugs will continue to persist especially in this holiday season.

Suspected drug couriers Roljoy Rosette and Joshel Delfin de Jesus may claim innocence and feign ignorance for supposedly being unaware of the contents of the paper bag they delivered to an undercover policeman, but their plight is not uncommon.

At the same time, Arellano’s disclosure of some police officers being on the take in the illegal drug protection racket should spur the police to further delouse and cleanse their ranks of scalawags who still persist in protecting the drug lords amid the marching orders by President Rodrigo Duterte to flush them out.

It’s been six months and the results of the relentless war on illegal drugs have only been the rising body count and the hundreds of millions of pesos’s worth of shabu and other illegal drugs that have been seized from the suppliers.

And yet we are perhaps nowhere near to cutting off the root of the illegal drug suppliers; or if we are, then we are inundated with legal wranglings brought about by difficulties in procuring evidence to build up cases against the drug suppliers and syndicates.

There may be little evidence but strong indications that the detained drug lords continue to effectively channel the drugs from abroad — supposedly from China — to various transshipment points to the country, notably through Eastern Visayas.

The Chinese government pledged to extend its fullest cooperation to the national government, and we hope there is some evidence that this would result to the arrest and punishment of these drug suppliers.

In pushing for the death penalty, the Duterte administration hopes to replicate that dramatic firing squad execution of convicted Chinese drug lords that was televised during the Marcos regime.

But aside from uprooting the source of the drugs, the government should mobilize the LGUs not only to provide rehabilitation to users and pushers but also to instill disdain and repugnance among the people on the dangers of using illegal drugs.

Through violence and intimidation, the government managed to temporarily close up the supply of illegal drugs. But it is through denying them and shutting down their market that the government will eventually succeed in driving the drug dealers permanently out of business.