Cracker prices up; fruits no change 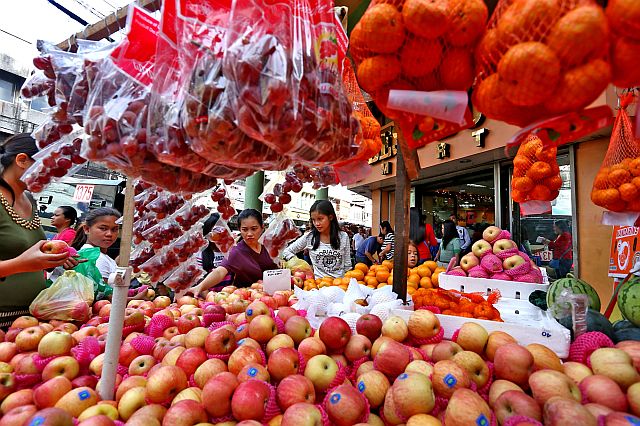 Fruit vendors at F. Gullas Street corner Osmeña Blvd. and other streets in the city start to display round fruits that people buy as part of the tradition to welcome the New Year (CDN PHOTO/JUNJIE MENDOZA).

Prices of some types of firecrackers at the firecracker zone at the South Road Properties (SRP) slightly increased as the vendors expect a surge of customers today while prices of fruits sold in Colon St., Cebu City, remain the same.

But Edna Parantar, a firecracker vendor, said they had no choice but to increase some of their products’ prices mainly because their supplier also increased their prices.
Parantar also noted a decrease in the number of their sales as compared to last year when there was no firecracker ban.

Parantar said that she estimated selling an average of P5,000 a day this year as compared to last year’s sales of P14,000 a day.

Parantar said that prices of big firecrackers like Judas’ belt and sky rocket increased by P50 to P100, but small firecrackers’ prices like the kwitis, bawang, small triangulo remain the same.

Meanwhile, prices of fruits, which are among the most bought products in this time of the year sold in Colon St., Cebu City, have remained the same.

Colon fruit vendors, however, have packaged some fruits like grapes and lemons so that customers who cannot afford to purchase fruits in bulk can buy them at lower prices.

Fruits like lemons, apple, pears, ponkan and guava range from P10 to P50 pesos each.

A lemon can be bought at P10 each while a package of 10 grapes is also at P20 each pack.