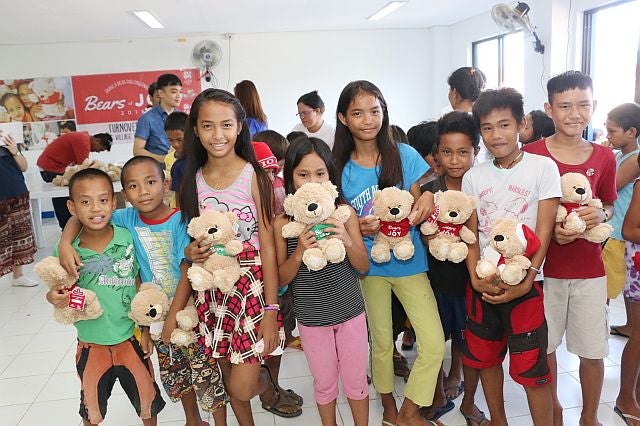 SM Bears of Joy bring smiles to the children of a village in Bogo City, who received them last Dec. 28, 2016. (contributed).

SM City Cebu turned over more than 400 SM Bears of Joy to the children in the SM Cares Village in Bogo City in northern Cebu on Dec. 28, 2016.

The SM Cares Village in Barangay Polambato is the housing project of the SM Group for the survivors of Super Typhoon Yolanda in Bogo City.

The village has 200 typhoon-proof concrete houses, a community center and a basketball court. The heirs of Wenceslao and Margarita Briones Fernan donated the one-hectare lot where the village is located.

The SM Bears of Joy is a project of SM Cares, which is the corporate social responsibility arm of SM Supermalls.

The project allowed SM shoppers to purchase a pair of plush bears, one of which they keep and the other to give for donation to the less privileged children in the community.

During the turnover of the SM Bears of Joy last Dec. 28, the parents of the children beneficiaries thanked SM City Cebu for bringing cheers to the village and for bringing back the smiles of their children.

Last year, SM malls nationwide were able to give more than 16,000 Bears of Joy to 47 communities throughout the country.

This year, the company wishes to share more through the generous participation of SM shoppers.

Before the distribution of the SM Bears of Joy, the Fernan family represented by Eloisa Fernan, wife of the late Chief Justice and Senate President Marcelo Fernan, and daughter Marissa Fernan, who is also vice president of SM Prime Holdings, Inc., distributed grocery items to the families at the SM Cares Village in Bogo City.