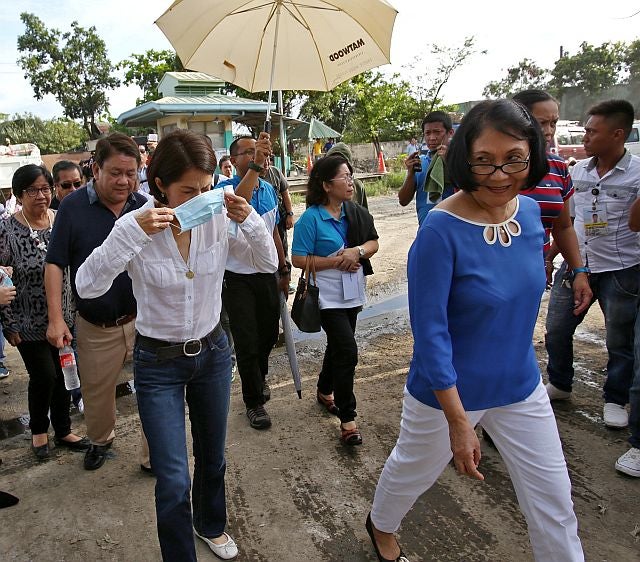 Environment Secretary Regina Paz Lopez puts on a surgical mask as she arrives at the Inayawan landfill last October for an ocular inspection, together with Cebu City Mayor Tomas Osmeña, following numerous complaints against the overwhelming stink from the dumpsite. Lopez then ordered its immediate closure. (CDN PHOTO/JUNJIE MENDOZA)

The year 2016 saw several changes in the City of Cebu — the biggest of which was the changing of guards at City Hall.

After being dealt his first ever political loss in the 2013 elections, Cebu City Mayor Tomas Osmeña handed his nemesis, Michael Rama, his own first loss as well, by foiling Rama’s bid for a third and last term as city mayor in the last May 2016 elections.

As election returns from the city’s 80 barangays trickled in hours after the polls, Rama was falling behind his challenger, Osmeña; and it became evident that the city’s mayoralty post, which the Rama campaign considered to be in the bag, was not for Rama to keep.

Looking shell-shocked, despondent supporters claimed that Rama had been “robbed” of his votes.

And almost as soon as their tears dried up, Rama immediately filed an election protest before the Commission on Elections (Comelec) to question Osmeña’s victory.

Rama and his supporters were unable to comprehend why the elections, which were not even too close to call based on Team Rama surveys, overwhelmingly went to Osmeña’s favor with a margin of 34,036 votes.

Before the end of 2016, last December, the Comelec Second Division ordered the start of recount proceedings for the pilot protested precincts of Rama’s camp.

“We welcome the decision of Comelec in finding that our petition is sufficient in form and substance. We believe that through a recount, the truth will be revealed,” said Rama.

But Osmeña consistently maintains that he had won the elections, fair and square, and a recount was not going to change anything.

“How did I cheat him in his own precinct? I must be that good in cheating. Your own precinct and you can’t even win? I challenge Mr. Rama to include the precincts where he lost,” Osmeña said in a news conference three days after Comelec’s recount order was released to the press.

Rama’s protest was obviously not going to derail Osmeña’s plans for the city.

In fact, he had been busy with his comeback at City Hall, ever since May.

Barely a day after his proclamation, Mayor-elect Tomas Osmeña wasted no time in sending a message to City Hall that he was back by announcing that he would engage in “ethnic cleansing” in order to remove loyalists of Team Rama from the city government bureaucracy.

Out of 26 City Hall departments, only three heads were able to retain their posts: Rafael Yap of the Transportation Office (CCTO) Evangeline Abatayo, the City Civil Registrar, and City Budget Officer Marietta Gumia.

The rest had either resigned, retired or were reassigned to other departments by Osmeña.

Over at the Cebu City Council, another turnaround.

What was once a body dominated by Osmeña allies under Bando Osmeña-Pundok Kauswagan (BO-PK) became a Team Rama-led council with majority of its members affiliated with the former mayor.

Initially at 11-6, Team Rama held an easy majority at the start of the 14th Sangguniang Panlungsod.

But in August 2016, Councilors Dave Tumulak and Hanz Abella announced a breakaway from Team Rama, opting to become “independent” councilors, they said.

Following their independence from Team Rama, Tumulak and Abella were given executive functions by Osmeña as deputy mayors on police matters and education, respectively.

While there may have been major changes at City Hall, some pressing issues — like the plight of informal settlers on province-owned lots, major infrastructure programs, drainage and the city’s mounting garbage, remained the same.

Due to overcapacity, the Rama administration padlocked the city’s 17-year-old landfill in Barangay Inayawan in January 2015 and began hiring the services of Asian Energy Systems Corp., a private landfill in Consolacion town, northern Cebu.

For the service, the city paid P700 as tipping fee for each ton of garbage dumped there.

Most of the city’s 34 south district barangays, with rickety old garbage trucks, could not make the needed daily trips to Consolacion to efficiently rid their areas of trash.

For these villages, Rama employed private haulers to bring the garbage all the way up to the northern town at a rate of P1,500 per ton, inclusive of the landfill’s tipping fees.

The then BOPK-dominated council branded Rama’s transaction as anomalous, counting 20 million pesos in funds spent monthly to pay for the privately owned landfill without a contract and without any effort, they said, to minimize approximately 500 tons of garbage generated by the city daily.

As soon as Osmeña took over the city’s helm, the Inayawan landfill was ordered reopened in July citing a report from the Commission on Audit (COA) which questioned the legality of the services entered into by Rama with the private landfill without a valid contract.

As truckloads of garbage were dumped pile after pile in Inayawan, numerous complaints on the nauseating stench of trash began to pour in.

The landfill is a close distance to the South Road Properties (SRP), an almost 300 hectare reclaimed land touted as the city’s next premier commercial and residential destination.

The complaints from residents and the business sector caught the attention of the now Team Rama-dominated city council, and through environment committee chairman Councilor Joel Garganera, the country’s Department of Environment and Natural Resources (DENR) was asked to intervene.

Osmeña would not budge.

“We are addressing the smell but the council refuses to let us buy anapog (limestone) to cover the smell. The council seems to be promoting a hidden agenda of (giving benefit to) a private hauling contractor (who charges) up to P600,000 a day,” he said in September when sought for comment on the growing concerns about the health hazards of the reopened landfill.

Garganera later filed a petition for a Writ of Kalikasan before the Court of Appeals after repeated calls to close down the landfill remained unanswered by the mayor.

The case was filed in September; and after a failed attempt to come up with a compromise agreement, the CA issued its decision in December.

“The Court is convinced that the continued dumping operations at the Inayawan landfill poses such a serious and pressing danger to the environment that could result in injurious consequences to the health and lives of the nearby residents, thereby warranting the issuance of a Writ of Kalikasan herein,” the CA said.

In order to abide by the CA decision, Osmeña closed down the Inayawan landfill and opened a one-hectare vacant lot at the SRP for the city’s garbage.

Described as just a “temporary transfer station” for the city’s trash, Osmeña said that he was left with no choice.

“At the moment, we have no choice but to leave what we collect in the existing transfer station at the edge of the SRP. This will not be permanent. We will only use it until we have a suitable permanent location and then everything will be transferred there,” he said.

“Under no circumstance will your city government be intimidated into pursuing an unlawful situation, specifically an act of graft. There is clearly politics behind this. Someone is trying to make money,” Osmeña added.

The new garbage station at the SRP did not escape the attention of environment officials who again called Osmeña to task as the city’s trash sat in the area for three days.

A transfer station, according to DENR Undersecretary Isabelo Montejo, had a 24-hour time limit within which to transfer trash to a sanitary landfill.

Last December 23, using the city’s budget savings, the city council approved the use of P9.2 million for the hiring of a contractor who could haul the city’s garbage out of the SRP within a 15-day period until December 31.

As the year 2017 unfolds, many Cebuanos, bothered by the stench of rotting trash, watch — with bated breath — the continuing saga on the city’s garbage as it slowly unravels piece by piece.

NEXT: The 93-1 land swap agreement with the Cebu provincial government.

Read Next
Drones to be regulated