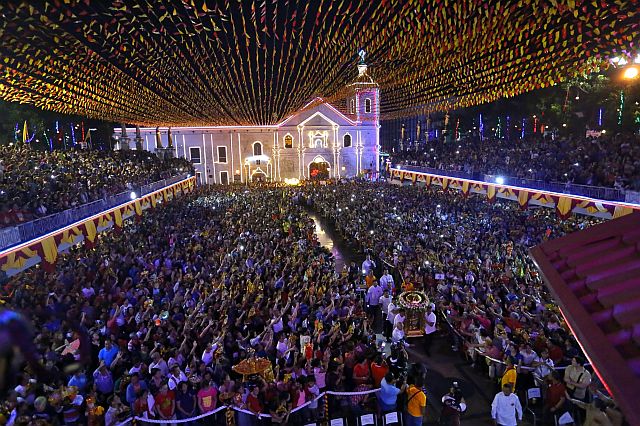 WALK WITH JESUS. Thousands of devotees raise and wave their Sto. Niño images to welcome the arrival of the statue of the Child Jesus at the Basilica del Sto. Niño Pilgrim Center after the “Walk with Jesus” dawn procession from the Fuente Osmeña rotunda that precedes the first of the novena Masses of the Sinulog Festival, the feast in honor of Cebu’s beloved Señor Sto. Niño. (CDN PHOTO/JUNJIE MENDOZA)

For 14 years, Charlito Nibrel was hooked on illegal drugs and gambling.

“Nadala ko sa barkada (I was swayed by friends),” he said.

At first, the native of the southern Cebu town of Minglanilla was having fun, but things changed when his vision dimmed in 2010 due to diabetes-related complications. He got so sick that he became bed-ridden for eight months.

But all through this, Nibrel found solace in the image of the Sto. Niño ensconced on a small altar beside his bed.

“Illegal drugs and gambling led me nowhere. . . . The Sto. Niño reminded me to return to Him instead,” Nibrel told Cebu Daily News.

His journey with God, however, was not all smooth sailing. In 2015, he lost his left leg in a motorcycle crash. The incident tested his faith, but it did not stop Nibrel from fulfilling a pledge to join the prayer walk in honor of the Child Jesus.

“Kon dili tungod niya (Sto. Niño), tingali wala na ko dinhi karon. Grabe ang akong mga giagian apan gipanalipdan ko sa Sto. Niño. (Had it not been for the Sto. Niño, I would not be here now. I went through a lot but the Sto. Niño was there to protect me),” said Nibrel as he held back tears.

With a pair of crutches, Nibrel, now 36, walked down Osmeña Boulevard with his wife to join the annual “Walk with Jesus” that opens the 452nd Fiesta Señor celebration, more popularly known as the Sinulog Festival, a week-long religious and cultural feast held to honor the Señor Sto. Niño.

Shortly before daybreak on Thursday, a sea of candlelight illuminated the length of Osmeña Boulevard where the image of the Sto. Niño de Cebu was brought in procession to mark the start of Fiesta Señor celebration.

Devotees braved a wet, chilly dawn to join the two-kilometer procession from the Fuente Osmeña rotunda to the Basilica del Sto. Niño for the 4:30 a.m. annual “Walk with Jesus” and the first novena Mass.

Devotees carried images of the Sto. Niño, recited the Holy Rosary and sang liturgical hymns, which were broadcast live on radio and amplified by speakers.

There were no fireworks or balloons along the procession route following an appeal from the Augustinian priests in charge of the Basilica to maintain the solemnity of the event and for public safety.

The flower-decked carroza that carried the image of the Sto. Niño arrived at the Basilica at 5:45 a.m. and was welcomed with shouts of “Pit Señor!” and the pealing of church bells.

The 3,500-capacity church courtyard was packed, with thousands more spilling into the streets outside of the Basilica and taking part in the Mass via the pre-installed large LED screens and television monitors that beamed the Mass going on inside.

Senior Supt. Joel Doria, director of the Cebu City Police Office, estimated the crowd who joined the procession at 40,000. 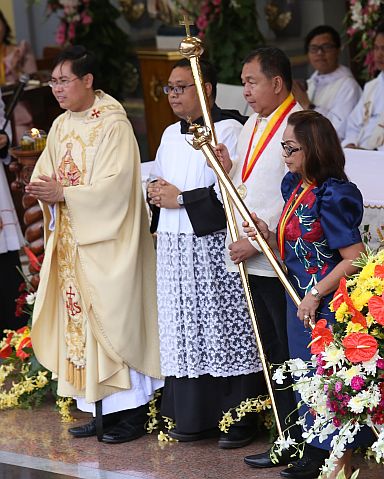 But Cebu City Councilor Dave Tumulak, deputy mayor on police matters, said the Cebu City Command and Control Center placed the number from between 250,000 to 270,000, including those who did not join the march and instead just waited at the Basilica complex. They computed the crowd size with a density of four persons per square meter.

In his homily, Basilica rector Fr. Pacifico “Jun” Nohara Jr. called on the people to keep faith with Jesus.

“He is calling us to be one with Him. Our Holy Child invites us all to come to him and to embrace His presence in our lives. There’s nothing that could be more wonderful than living a life truly inspired by the love of God, fully devoted to our faith, and united to others by doing good deeds,” he said.

The theme for this year’s feast is “Santo Niño: Source of Communion, Protector of Creation,” which is patterned after the pastoral thrust of the Catholic Bishops’ Conference of the Philippines on the Year of the Parish, and Pope Francis’ encyclical “Laudato Si” on the care of the environment.

Laudato Si (“Praise be to you”) is the first line of a canticle by St. Francis that praises God with all of his creation.

Nohara also called on the faithful to take care of everything God has entrusted to them.

“All of us are stewards of creation. We are called to love, protect, and preserve all He has given us. Destroying them is threatening our own lives and the lives of our future generations,” said Nohara, a Cebuano from Pilar town in his first year as Basilica rector.

The devotion to the Sto. Niño, he said, is not confined to venerating the Holy Child’s sacred image.

“Yes, we Filipinos are so much devoted to the Sto. Niño but we see around us street children, abused children and those abandoned by parents,” Nohara said. “May our devotion to the Sto. Niño lead us to loving and caring our children as well as the weak and vulnerable in our society. Let us continue our devotion, not just during the Fiesta Señor, but through the rest of our lives.”

As part of tradition, the fiesta’s Hermano and Hermana Mayores for 2017 — Leo and Cristina Manguilimotan — were officially presented to the people during the Mass with about 60 diocesan and religious priests as concelebrants. 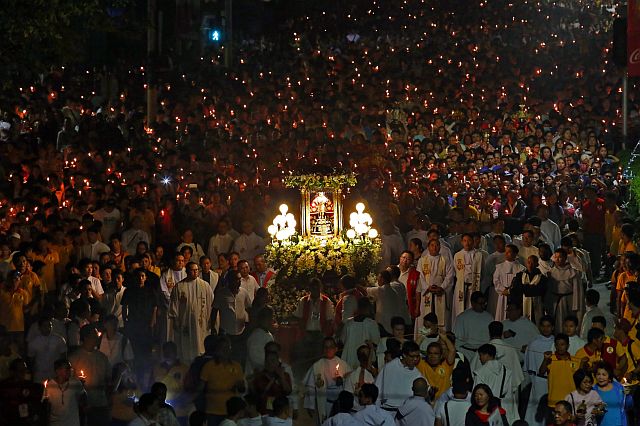 Devotees carry their own Sto. Niño image during the “Walk with Jesus” dawn procession from Fuente Osmeña rotunda to the Basilica del Sto. Niño for the first of the novena Masses in honor of Cebu’s patron, the Señor Sto. Niño, whose feast is celebrated through the Sinulog Festival, which will culminate in a grand parade on January 15. (CDN PHOTO/JUNJIE MENDOZA)

During the offertory, people waved their hands in the air in unison as they sang “Bato-Balani sa Gugma” (Magnet of love), a hymn in honor of the Sto. Niño.

The dawn procession will be held except on January 5 and 13, while 11 Masses will be held at the Pilgrim Center every day leading to the feast of the Sto. Niño on January 15.

The Basilica, which has been the center of the four-century-old devotion to the Sto. Niño, will be open 24 hours from January 5 to 15 to accommodate the multitude of Sto. Niño devotees who come to pay homage to the original image of the Sto. Niño, which is enthroned in a glass case at a side chapel inside the Basilica. The image was a baptismal gift by Portuguese explorer Ferdinand Magellan to Cebu’s Queen Juana in 1521.

On Jan. 13, a Friday, another prayer walk from Fuente Osmeña to the Basilica will be held as the “Walk with Mary,” to be followed by the Misa de Traslacion at 5:30 a.m. The Sto. Niño and Our Lady of Guadalupe de Cebu images will then be brought to the National Shrine of St. Joseph in Mandaue City in a motorcade.

The annual “traslacion,” a Spanish word which means “to transfer or move,” depicts the “reunion” of the Holy Family — the Child Jesus, his mother Mary and foster father Joseph.

After an overnight vigil at St. Joseph’s Shrine, a 4 a.m. send off Mass will follow, after which a foot procession to the Ouano Wharf in Mandaue City will be held to precede the fluvial procession.

The vessel carrying the icons will reach Ouano Wharf by 6 a.m. From there, a sea voyage across the Mactan Channel will bring the images of the Child Jesus, Mary and Joseph to Pier 1 in Cebu City.

The Philippine Coast Guard Cebu is accepting registration of participating vessels, but boat owners will need to register first with the Maritime Industry Authority (Marina).

At 1:30 p.m. of January 14, the grand solemn procession of the Sto. Niño will start, covering 5.8 kilometers, along the city’s main streets.

From the Basilica, the carrozas of St. Joseph, Our Lady of Consolation and the Sto. Niño de Cebu will pass along Osmeña Boulevard.

Upon reaching the Fuente Osmeña circle, the procession will proceed to General Maxilom Ave., Imus Street, MJ Cuenco Avenue, Urdaneta St., P. Burgos St., and back to the Basilica.

On Sunday, Jan. 15, the feast day of the Sto. Niño, Cebu Archbishop Jose Palma will officiate a pontifical Mass at 6 a.m. to be followed by eight other Masses.