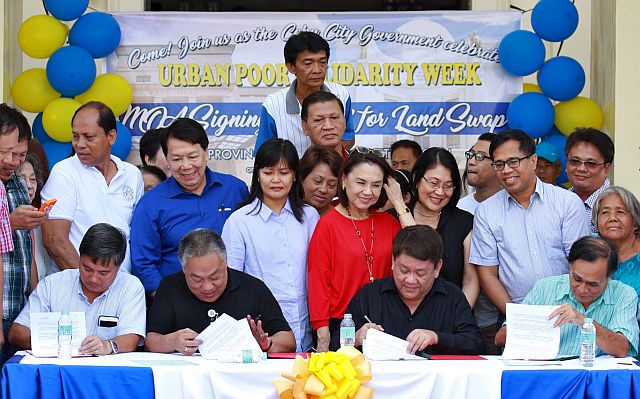 After more than 20 years, settlers of the 93-1 lots can have a sigh of relief as Cebu City Mayor Tomas Osmeña (seated, second from right) and Cebu Gov. Hilario Davide III (seated, second from left) finally signed the memorandum of agreement (MOA) for the 93-1 land swap deal last Dec. 7. The signing will facilitate the turn over of the province-owned lots to the city government. (CDN FILE PHOTO).

In the afternoon of December 7, in front of hundreds of beneficiaries, Cebu City Mayor Tomas Osmeña and Cebu Gov. Hilario Davide III inked a memorandum of agreement (MOA) for a land swap between the two local government units (LGUs).

It was a major breakthrough reached by the city and the province which took all of 20 years to complete after several negotiations fell through.

The agreement referred to a long-standing dispute between the city and the province involving informal settlers occupying provincial lots within the city.

Back in 1993, the Cebu provincial government enacted SP Ordinance 93-1, designating several parcels of land that it owned for direct sale to its actual occupants on installment basis.

The parcels of land are located in the city of Cebu, particularly in 11 barangays, namely Apas, Busay, Camputhaw, Capitol Site, Kalunasan, Kasambagan, Lahug, Lorega, Luz, Mabolo and Tejero, with a total area of roughly 32.4 hectares.

Eventually, the period during which the properties could be sold to its actual occupants expired, with most of them unable to pay in full either because they could not afford it or simply ignored the requirement in the hope that the lots could be given to them for free.

The MOA, signed by Osmeña and Davide last December, was meant to facilitate the transfer of the ownership of provincial lots to the city in exchange for city-owned property located at the North Reclamation Area (3.3 hectares) and the South Road Properties (2.5 hectares).

The city also traded its Septage Treatment Plant and abattoir, a 9-hectare land in the town of Consolacion and the Cebu City Zoo in Barangay Kalunasan for province-owned lots located within the city.

While Capitol — on top of the 93-1 lots — will turn over its 1.5-hectare Department of Agriculture (DA) compound in Barangay Guadalupe; 2,358 square meters of property along Gorordo Ave.; and a 577-square-meter lot in Barangay Capitol Site to Cebu City.

The MOA signed by the two top officials was ratified days later by both the Cebu City Council and the Cebu Provincial Board.
“A promise kept … After all these years, it’s finally done,” Osmeña said.

Osmeña and Davide had both promised a prompt resolution of the conflict as they each campaigned for votes in the 2016 elections.

“Our happiness is immeasurable. At least now, the solution to our problems is with the city already,” said 93-1 Movement president Emily Malto as around 3,000 beneficiaries out of 5,000 had yet to pay for the lands they occupy.

“We will just wait until we will be called by the city so that they can also hear our sentiments and how we would like to go about this,” Malto added in Cebuano, referring to their obligation to still pay for their respective lots.

The settlers will now have to pay under a payment program to be set up by the city government once it assumes control of the lots from the province.

The year 2016 also saw glimpses of major infrastructure projects that will soon be in place in Cebu City: the Cebu Bus Rapid Transit (BRT) Project, the proposed 300-megawatt coal-fired power plant in Barangay Sawang Calero and the Cebu-Cordova Bridge project.

Despite the change in leadership at City Hall, bridge proponent Metro Pacific Tollways Development Corp. (MPTDC) reported no major hitches in the project.

It was former Cebu City mayor Michael Rama who signed the joint venture agreement with MPTDC on behalf of the city, after a long series of negotiations with the company.

Osmeña continued to help the private proponent after winning against Rama in the 2016 elections.

However, an initial agreement with Rama to build a different access to the bridge from the mouth of the Guadalupe River was scrapped following several meetings between MPTDC and the new Osmeña administration.

Had the plan for a second access to the bridge via Guadalupe River pushed through, at least 1,000 families would have been displaced.

The decision also saved the city the trouble of having to expropriate private lots that would have been affected by the Guadalupe River access.

MPTDC still needed to comply with documentary requirements for the Cebu-Cordova Bridge project, and had yet to get the approval of the Toll Regulatory Board and the Philippine Reclamation Authority for the project.

MPTDC legal consultant Aristotle Batuhan expects construction of the bridge to begin by the second quarter of 2017.
They hope to finish by 2020.

“We are hopeful that we will get the permits or approvals soon,” he said.

Read Next
Tom to investigate business permit applications himself