Tuburan wins it with horse-themed story 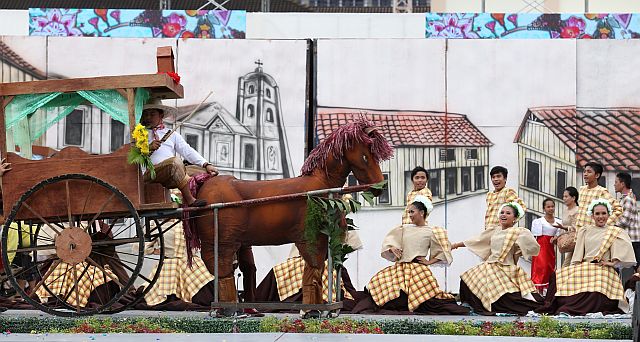 The concept of an ill horse healed by the Sto. Niño helped the Municipality of Tuburan contingent to bag the Best in Ritual Showdown in the High School division of yesterday’s Sinulog sa Kabataan sa Lalawigan held at the Cebu City Sports Center.

The contingent won the cash prize of P350,000 and P30,000 for their choreographer Fernando Cabrillas.

The Tuburan contingent told a story of a thanksgiving and praise to the Sto. Niño after an ill horse was healed.

And the celebration that followed involved horses pulling horse- drawn carriages on the center stage.

The performance also made the contingent win first place in the Best in Street Dancing category and the Best in Costume category – each category with a prize of P50,000.

The Carcar City Division contingent won second place with a performance telling the story of a life of a policeman in training until he finished the program with his prayers to the Sto. Niño.

Carcar received P200,000 for the second place win and P50,000 for winning the best in musicality category.

The Looc Norte National High School (Municipality of Asturias, which was last year’s winner) told the story of how Christianity started in Cebu.

The contingent showed the giving of the image of the Sto. Niño to Rajah Humabon and Reyna Juana, who were the first Filipinos to accept Christianity, from Ferdinand Magellan.

The group received P150,000 for placing third in the ritual showdown category.

The Bitoon National Vocational High School portrayed the life of a fisherman who found an image of the Sto. Niño. The group placed fourth and received P125,000 for their win.

For the Elementary Division, Talisay City Division, returned to the winner’s circle with their win in the ritual showdown and the prize money of P350,000.

The group was exempted from participating in last year’s Sinulog sa Kabataan sa Lalawigan because of their three-peat wins in 2013, 2014 and 2015.

The Talisay City Central School representing the Talisay City Division started their dance showing a back drop, a painting and narration of joyful mysteries.

There was even a scene where an acapella version of “Ave Maria” was sang while the dancers dressed as Mother Mary and an angel appeared on stage.

The contingent told the story of Jesus Christ and the Christmas celebration. The group got the loudest applause among the competing contingents during the transition of changing the colors of their costumes from white to violet to gold and red combinations.

The group also bagged the best in musicality, best in street dancing and best in costume with each category having a P50,000 prize.

DepEd Danao won second place in the ritual showdown with their savings and investment- themed performance.

They used a huge piggybank, large peso coins as props. They received P200,000 for the win.

The Tribu Sugbogo (Bogo City) took the fourth place for the ritual showdown and the P125,000 prize.

Ricky Ballesteros, the executive director of Sinulog Foundation Inc. (SFI) said that he was happy seeing all the contingents yesterday with new concepts.

“It’s a very close competition. Even the judges had a hard time deciding who would be the winners,” Ballesteros told the reporters.

Ballesteros said that the contingents were judged based on their choreography, concept, production design and overall visual impact.

All the winners for the Best in Ritual Showdown yesterday will automatically join the Grand Parade on January 15.

Ballesteros said that he would remind the contingents on the props management.

“If you have a concept with a lot of props then better to manage it. Sometimes with too much props, it will ruin the presentation. There is always room for improvement,” he said.

Dr. Juliet Jeruta, regional director of the Department of Education (DepEd-7), during her speech said that she was speechless when she saw the presentations from different towns.

“As what we can see, the themes and concepts presented are socially relevant in the society,” Jeruta said.

Read Next
Youth and prayers win it for Talisay School