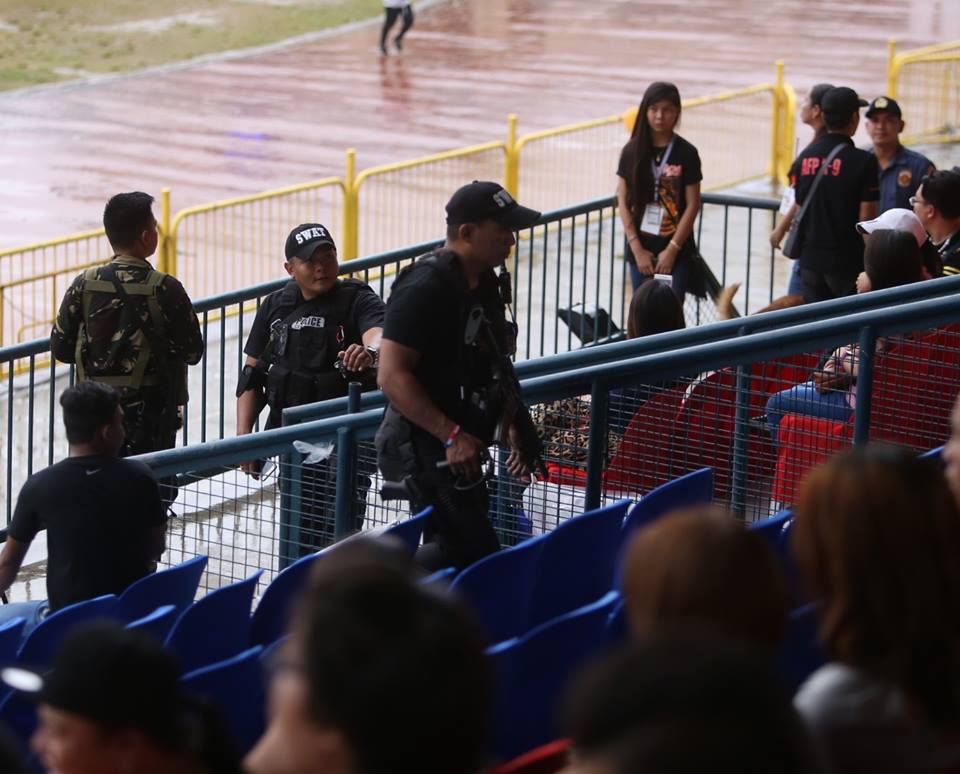 As part of the security measures for the Sinulog celebration, a 10-day gun ban will be imposed in the entire city and province of Cebu starting Monday, January 9.

“Only members of the PNP, Armed Forces of the Philippines, and other Law Enforcement Agencies (LEAs), who are performing official duties and in agency-prescribed uniforms will be allowed to carry firearms,” he said.

The PNP will not entertain requests for gun ban exemption.

Individuals, including civilians, off-duty cops, military personnel, and security, who will be found carrying guns outside their houses, will be arrested for illegal possession of firearms.

A two-day gun ban is also being imposed in the city of Manila starting yesterday as added security measure for the Black Nazarene procession today.

Chief Supt. Noli Taliño, director of PRO-7, earlier asked Dela Rosa to also allow a special gun ban during the Fiesta Señor celebration that started last January 5 and will end on January 15, the feast of the Sto. Niño de Cebu and the culminating day for the Sinulog Festival highlighted by a grand parade of street-dancing contingents, floats and higantes (giants).

The gun ban period was extended to January 18 since Cebu will also be hosting the Miss Universe swimwear competition, which will be held at JPark Resort in Lapu-lapu City on Jan. 17.

Senior Supt. Joel Doria, director of the Cebu City Police Office, said they have yet to receive a formal copy of the memorandum from PRO-7 on how the gun ban will be carried out.

“So far, what we received was just a text message informing us about the approval of our request for a gun ban. We’re waiting for the region (PRO-7) to give us the specifics on how it will be implemented,” he said in a phone interview yesterday.

Cebu Daily News tried but failed to reach Taliño for comment yesterday. A text message sent to him was also left unanswered.

Doria believed a gun ban will help law enforcers in maintaining peace and order during the Fiesta Señor celebration that includes the Sinulog Festival.

From 5,000, the number of law enforcers and private security personnel who will secure the crowd was recently increased to 8,000.
Doria, however, maintained that they have not so far received any threats from terrorists.

“We just have to continue monitoring, not just Cebu City, but as well as neighboring cities,” he said.

Security concerns have been raised after rumors of bomb threats spread all over Cebu on Nov. 4 last year. The rumor died down during the Christmas break but since last week, the same rumor has persisted anew after the explosion that injured 32 persons, including 10 children, during a town fiesta in Hilongos, Leyte last Dec. 28.

Taliño, in an earlier interview at the Basilica del Sto. Niño, was quick to allay worries, saying the police and military are securing Cebu well.
“People just have to be alert and vigilant. So far, we have not received direct threats. But if there are unusual activities and suspicious-looking people, please report them immediately to the police,” he said.

Taliño said policemen will secure the Basilica in downtown Cebu City, as well as at the procession and parade routes. Millions of people, both local and foreign, are expected to join the religious activities and the Sinulog Festival in honor of the Sto. Niño.

Police and military personnel are enforcing stringent security measures for the 452nd Fiesta Señor celebration and the Sinulog to ward off possible terror attacks.

When they go to the Basilica, devotees are discouraged from bringing backpacks and to instead use transparent bags for security personnel to easily inspect their belongings.

The number of security guards at the centuries-old church was also increased from 65 to 95, while K9 dogs are helping monitor the basilica complex.
PRO-7 is also regulating the use of drones while habal-habal (motorcycle-for-hire) drivers will be tapped to help authorities in detecting possible presence of bombs in various areas in Cebu City for the duration of the Sinulog celebration.

Doria said only drones covered by permits from the Civil Aviation Authority of the Philippines (CAAP) and PRO-7 will be allowed along the route of the solemn procession of the Sto. Niño on Jan. 14 and the Sinulog festival on Jan. 15.

In a speech delivered during the Sinulog sa Barangay at the Cebu City Sports Center yesterday, Mayor Tomas Osmeña urged the people to pray and to help law enforcers in maintaining peace and order.

Tumulak, in a separate interview, appealed to gun owners to follow the gun ban to avoid arrest.

“The order was signed by PNP chief Dela Rosa. As responsible gun holders, you should abide by the rules and whatever issuances by the PNP,” he told CDN.

Tumulak said checkpoints will be conducted in strategic areas in Cebu City to arrest violators of the gun ban.

“No one is exempted. And everyone, including law enforcers, should follow the gun ban. Anyway, this is just for 10 days,” he said.
The Augustinian fathers of the Basilica Minore del Niño welcomed the implementation of a gun ban for the Fiesta Señor celebration.

“It’s good for us. That is an added security measure. It can contribute to a peaceful and safe Fiesta Señor celebration. That’s a good news, so to speak,” Fr. Ric Anthony Reyes, media liaison officer and the head of the Fiesta Señor’s general secretariat, told CDN over the phone.
“At least, we can focus on the religious and cultural activities without having to think much about some trigger-happy people who use guns for violence,” he added.

Security agencies also have no problem in complying with the special gun ban.

Raul Rendon, operations manager of GDS Security and Detective Agency Inc., said part of their standard operating procedure is not to allow security guards to carry their firearms when they are already off duty.

“Security guards will always carry with them a duty detailed order (DDO) when they are on duty. The moment they are already detailed, they are armed and equipped together with the DDO which contains the description of their firearm and their duty hours,” Rendon told CDN.