‘Zero signal’: The NTC agrees to shut down signal during Sinulog Grand Parade 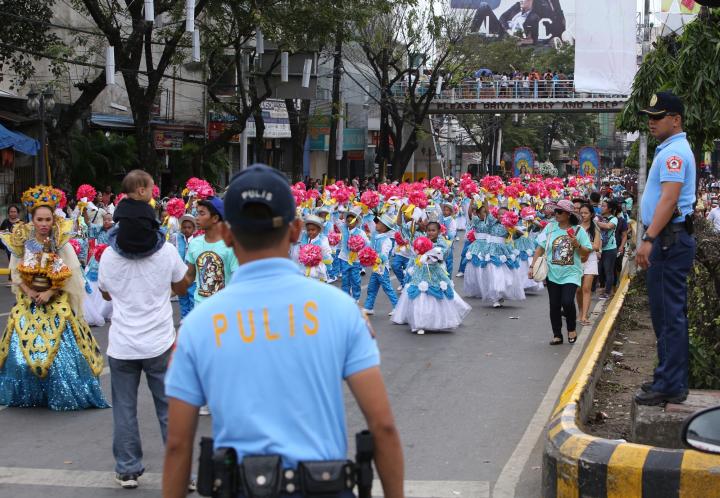 Those who will attend the Sinulog Festival activities this weekend or live anywhere near the fluvial procession and grand parade’s routes in Cebu City must plan ahead since mobile communication will be impossible in these areas during this time.

The National Telecommunications Commission (NTC) yesterday approved the request of the Police Regional Office in Central Visayas (PRO 7) to shut down cell sites surrounding the Basilica del Sto. Niño and along the routes where the fluvial and land processions will take place on Saturday, and during the dawn Mass and the Sinulog grand parade on Sunday.

The police advised families and groups setting out to take part in these events to agree on their meeting places or time since “zero signal” will be implemented for most parts of these two days.

Taliño asked for the public’s understanding.

He said over 8,000 police officers and enough handheld radios will be in place in time for the weekend activities.

“We have more than enough. There are also communication groups who volunteer to assist,” Doria said.

Taliño said they had coordinated with Globe Telecom and Smart Communications “for us to implement the security measure of shutting down the signal.”

But it is not just Cebu City but the entire Metro Cebu area that is expected to be affected by the shutting down of cell sites during tomorrow’s solemn procession and this Sunday’s Sinulog grand parade, according to Cebu City Councilor Dave Tumulak.

Tumulak said he was briefed by technical representatives from both Globe Telecom and Smart Communications yesterday and was told that shutting down wireless signals in selected places is not possible.

“They explained that if cell sites in some areas in Cebu City are shut down, the signal from other cell sites like that in Mandaue or Lapu-Lapu may still reach Cebu City,” he explained.

This is why cell sites located outside Cebu City also have to be shut down, he was told.

Tumulak, however, said that while mobile SMS, calls and internet will be disabled this weekend, people can still get in touch with each other when they use landlines or broadband internet, which is connected to a communication line and not wireless.

Taliño said they discussed the specifics on the cell site shut down, like the duration and areas to be affected.

He said that during the fluvial procession this Saturday, the cell sites will shut down as early as 3 a.m. The signal will resume “a few hours” after the procession has ended, he added.

During the Sinulog grand parade on Sunday, Taliño said cell sites will also shut down at 3 a.m., or hours before the street dances will start at 9 a.m.
The whole route of the fluvial procession and grand parade will be affected.

Globe Telecom, in a statement, said it will comply with the directive of NTC to temporarily shut down its mobile services in some areas in Cebu City during the celebration of the Sinulog Festival.

“We are appealing to our customers for understanding when we temporarily turn off mobile services including voice, SMS, and mobile data connection as this is all part of security measures adopted by government authorities for the event. We are one with the government in having Cebuanos celebrate a peaceful Pit Senyor,” Castelo added.

Castelo said that Globe will issue advisories to its affected customers for the details of the NTC order within the affected areas.

He added that telco operators usually receive directives to temporarily shut down mobile signal in large events, such as Feast of the Black Nazarene early this week and Pope Francis’ visit in early 2015, to enhance security of participants.

Mon Isberto, the public affairs head of Smart Communications, has also said they will obey what NTC will ask them to do for the safety of the public.

“If authorities instruct us to temporarily suspend our wireless services in the interest of public safety, we will comply,” he said in a statement to Cebu Daily News on Wednesday.

Tumulak said the telcos conducted survey since yesterday and that in Cebu City alone, the zero signal will involve shutting down 15 cell sites, including those in the mountain barangays.

“Triangular ang desensiyo sa cell sites. If dili kasulod ang usa, naa pay duha. So pagngon ang uban sa pagsiguro lang (The locations of the cell sites are designed to be triangular. So if one cell sites is down, there are still two others that can provide signal. So they will also have to be shut down),” Tumulak said.

Tumulak, who is also the deputy mayor on police matters, assured that the cell sites’ shutdown will not affect communication between the city’s emergency responders and volunteers.

This was affirmed by Cebu City Disaster Risk Reduction and Management Office (CCDRRMO) head Nagiel Bañacia. “We are using hand-held radios in communicating among ourselves in case of emergencies,” he said.

He said they also support the plan and that they cannot do anything about it. Tumulak also said that as a contingency measure, the city has put up a separate repeater in an undisclosed location last Monday.

He said all repeaters of radio and television stations as well as that of the police are located somewhere in Barangay Busay. “In case of a sabotage, we can use this additional repeater,” he said.

He added that he also asked Globe and Smart to double their security in their cell sites to avoid any problems. Tumulak also said he asked the Department of Energy to secure all oil depots and gasoline stations.

The DOE was also asked to order gas stations to refrain from selling gasoline to people who come with containers or gallons.