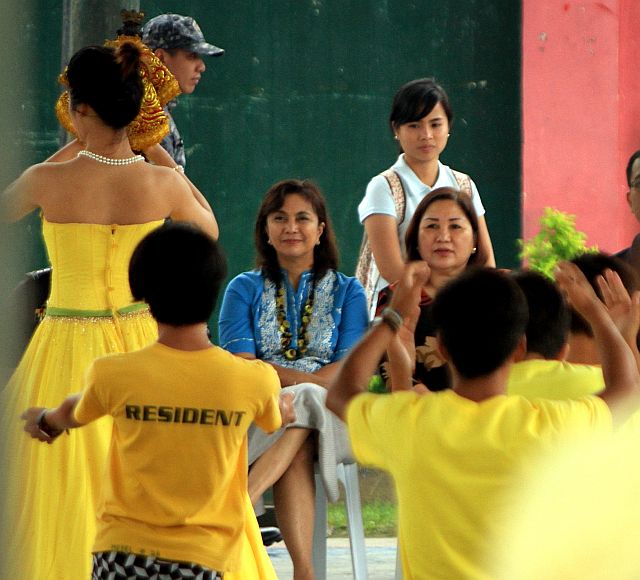 Vice President Leni Robredo visits Operation Second Chance and is treated to a presentation by the CICLs. (CDN PHOTO/ROBERT DEJON)

VICE President Leni Robredo vowed to address jail congestion and to come up with a holistic way to address the rehabilitation needs of female inmates and children in conflict with the law (CICL) in Cebu City.

Compared to other facilities in the Philippines, the Vice President said Cebu City jail’s female dormitory and the CICL center were very clean and orderly.

However, much like the rest of the facilities in the country, the two face the problem of overcrowding. In the case of inmates of the Cebu City Jail, water supply is also a problem since the facility is located uphill.

“The existing livelihood and rehabilitation programs here are better than most of those in the rest of the country, but the challenge is how to make long-lasting positive effects on inmates,” she said during a press conference at the Cebu City Operation Second Chance Center (OSCC) in Barangay Kalunasan on Saturday.

Robredo arrived in Cebu at past 11 a.m. and proceeded to hold separate consultations with Cebu City Jail’s female inmates and OSCC’s minor offenders.

Also present were Cebu City Mayor Tomas Osmeña and his wife, Cebu City Councilor Margarita Osmeña, but they had to leave early to participate in the foot procession in honor of the Child Jesus, the Señor Sto. Niño.

Lea Japson, head of the Department of Social Welfare and Services (DSWS), was also present during the activity.

Robredo said, “Majority of the inmates are here because of drug cases. I want to take the opportunity to introduce a program that will maximize rehabilitation while they are inside,” although she did not elaborate.

Among the concerns raised by inmates during the consultations were overpopulation, water supply and delayed resolution of their cases.

Robredo said her office will advocate and lobby for this to the Supreme Court in a bid to put an end to “slow justice” and solve congestion issues inside jails.

She said the slow resolution of their cases, in effect, contributed to jail congestion.

“We will take this up with the Supreme Court. There are those who should not be here, but are still here because of slow justice. The Office of the Vice President will advocate this,” said Robredo.

The Cebu City Jail’s female dormitory only has a capacity of 62, but is currently accommodating more than 400. The 200-capacity CICL center, meanwhile, already has 217 residents.

Carlos (not his real name), one of the residents at the OSCC, said he hopes the Vice President will also help address their other needs at the center such as food.

He also hopes the problem in lack of manpower will be given attention. At OSCC, there are only two social workers and nine house parents who handle more than 200 residents.

The 17-year-old resident, nonetheless, was thankful that he was given a second chance at life inside the facility.

“When I was outside, I wouldn’t listen to my parents. I now know how to respect myself and those who are older than me,” he told Cebu Daily News.

Carlos was placed inside the facility after he was caught in possession of a firearm during a police raid inside his home in 2014.

He said he stopped going to school after third grade, but was determined to go back once he is reintegrated into the community. He said he also wants to become a nurse one day so he can help those who are sick.

Jenny Zamora, social welfare officer, said she hopes there will be additional facilities constructed in the countryside to accommodate CICLs in Cebu.

She explained that the OSCC not only caters to Cebu City residents but also to those from the cities of Mandaue and Lapu-Lapu and other towns in the province.

The OSCC is jointly managed by Cebu City’s Department of Social Welfare and Services (DSWS) and the Bureau of Jail Management and Penology in Central Visayas (BJMP-7).

For 2017, the center has a proposed budget of around P12 million for operations.

The OSCC is said to be the first of its kind in the country, established even before Republic Act 9344 or the Juvenile Justice Law was enacted.

The facility was meant to save minor offenders, who were then detained along with hardened criminals at the Bagong Buhay Rehabilitation Center (BBRC), from becoming full-fledged criminals themselves.

Since then, the OSCC has accommodated minor offenders from other local government units outside of Cebu City referred by the courts.