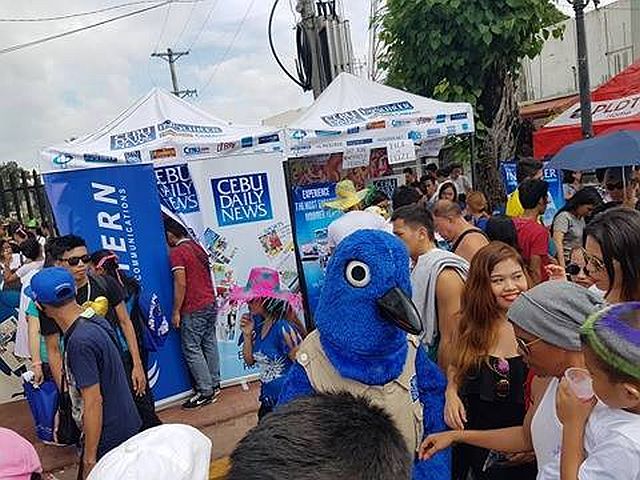 While the Sinulog grand parade was on-going, throngs of revelers from different ages took a pause from watching the colorful festival to drop by Cebu Daily News’ booth located along Osmeña Boulevard to capture and preserve their Sinulog moments and win exciting prizes.

By just purchasing a copy of CDN, Bandera or Philippine Daily Inquirer, the revelers were given a chance to have their photos taken at the CDN photobooth or get a henna tattoo for free.

CDN’s very own mascot, Siloy, also visited the booth adding more attraction, encouraging more passing revelers to stop by and take a photo with him.

Kids and their parents patiently lined up for the treats while getting a doze of the latest news as they leafed through the pages of their CDN, Bandera and PDI copies.

Among those who dropped by the booth was Diana Bechayda, 22, a hotel reservation officer from Boracay. It was her and her four friends’ first time to grace the Sinulog festivities and so having their “groupfie” taken was for her the best idea to capture their first Sinulog experience.

Like many others before her, Diana also had the chance to win CDN freebies like paper fans, ballpens, scratch pads and Guyito dolls.