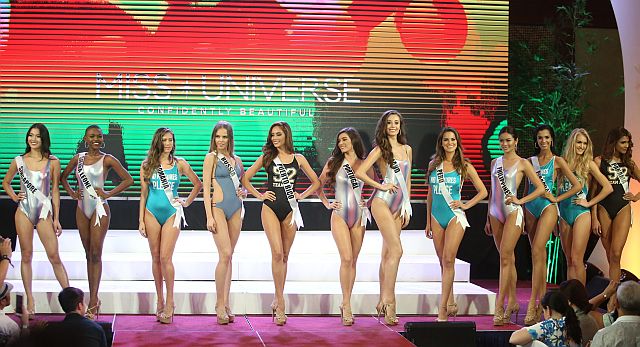 THE COLD and gloomy weather in Cebu was no match to the warmth of the Cebuanos as they welcomed the 86 candidates of the 65th Miss Universe pageant in a program that included a traditional Sinulog dance, a fashion show and barrio fiesta luncheon.

Students and teachers from different high schools in Lapu-Lapu City, with colorful flaglets and ballons on hand, lined up the streets as early as 6 a.m., ready to greet the candidates long before they passed through in a motorcade from the Mactan Cebu International Airport (MCIA) to JPark Resort Island Resort and Waterpark Cebu, the venue for the pageant’s swimsuit presentation.

Several students wore Miss Universe crowns made of cardboard that were distributed by the Lapu-Lapu City Government. But the dark skies pushed organizers to move the swimwear presentation from the outdoor Abalone Garden of the resort to its Triton Grand Ballroom.

At least 800 people were squeezed inside the 600-capacity ballroom but there were more who were not able to get inside due to the limited space.

“You don’t know what we went through to bring this (Miss Universe pageant) here,” Tourism Secretary Wanda Teo told the audience after the swimsuit fashion show. The audience replied with a resounding applause.

Teo, one of the primary forces who pushed for the Philippines’ hosting of the international beauty pageant, lauded the combined efforts of private and public sectors to bring the Philippines to the world stage.

Former Ilocos Sur governor Luis “Chavit” Singson, LCS Group president and one of the partners of the pageant, said the Miss Universe is back to where it rightfully belongs. The Philippines has hosted the pageant twice–in 1974 where Margie Moran of the Philippines won the crown and in 1994 when Sushmita Sen of India won Miss Universe.

“That is why it is right, in the very real sense, that we greet our guests ‘Welcome home’.In the many stops that we will be doing around the country, it is our goal to showcase why the Philippines is a visitors’ haven and show what we can offer to the rest of the world,” said Singson.