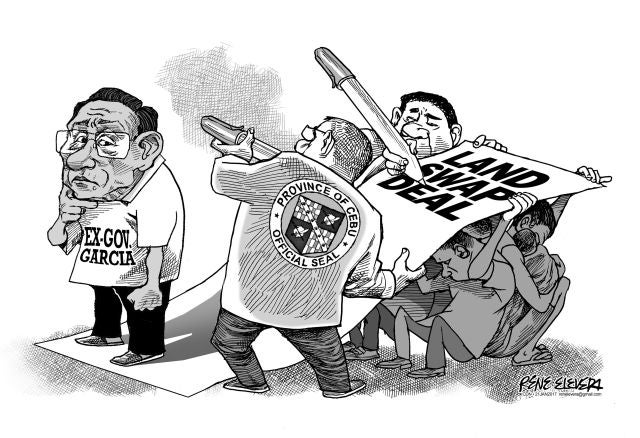 Though former congressman Pablo Garcia’s criticism of the land swap deal entered into last month between Cebu City and the province may have legal basis, it is primarily grounded on his premise that the province still rules over Cebu City.

As such, Garcia argues, the Capitol can do pretty much what it wants on the lots covered by Provincial Ordinance 93-1 regardless of the sentiments of Cebu City Hall which counts the settlers occupying these lots as their constituents.

Being a former governor himself and the father of former governor and now Rep. Gwendolyn Garcia of Cebu’s 3rd district, the elder Garcia’s sentiments on the issue is quite understandable, though we doubt if the incumbent Provincial Board (PB), made up mostly of allies of Cebu Gov. Hilario Davide III, would be sympathetic with his call to review and possibly rescind the land swap deal.

In calling for the review of the land swap deal, Garcia claimed that it was “injurious and grossly disadvantageous” to the province since it is giving up land that is worth more than what the city government had offered for the deal.

In making that claim, we hope that the former congressman can produce numbers or a fair market evaluation of the lots in question to support his contention. Some of the lots offered to the province include a portion of land in the South Road Properties (SRP) as well as block 27 in the North Reclamation Area.

The city government’s offer was considered by the PB to be better than the previous deal offered by former mayor Michael Rama, which consisted of P500 million cash plus some land owned by the city that was occupied by constituents of the province in Mandaue City, Consolacion town and Talisay City.

Another argument posed by Garcia was that the province could have simply dealt with the settlers directly, offering to sell them the lots under a mortgage program of the Pag-IBIG Fund.

However, a significant number of these settlers have not paid the lots they were occupying or have yet to finish paying for them for one reason or another. If what Garcia said was true, then the province could have dealt with the problem earlier either during his tenure or that of his daughter’s.

The province could have been done with it without the city government even lifting a finger to address the problem. Still, with everything he said, unless Garcia plans to file legal action to question the land swap deal, there is very little that he or the others can do to stop it.

While Garcia keeps on harping about the province’s loss, there was hardly any word on what to do with the families whose welfare lie at the crux of this land swap deal between the city and province.

It is hoped that with the land swap deal, all of the settlers can finish paying for the lot they occupy and have some sense of security of tenure which they can pass on to their families.

Read Next
Amid shouts of change