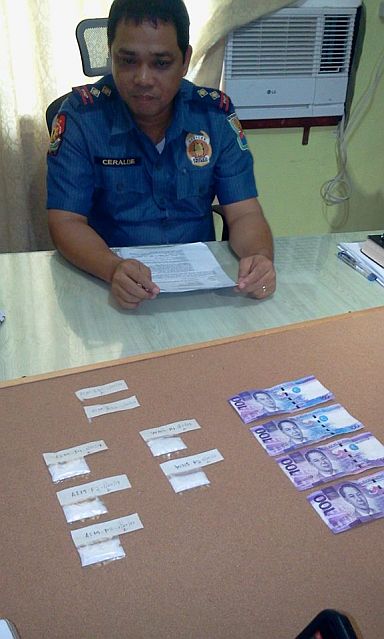 SEVEN persons were arrested and more than P400,000 worth of suspected shabu were confiscated by Cordova police in separate buy-bust operations yesterday and last Thursday in Barangay Bangbang, Cordova town.

Antonio Macan, 33, and his companion Wilson Salzar, 30, both residents of Sitio Lantugi, Barangay Bangbang, were arrested by the police led by Senior Insp. Clemente Ceralde Jr., commander of Cordova Police Station. Twenty-five grams of suspected shabu with a total value of around P287,000 were also confiscated from their possession during a
buy-bust operation past  9 a.m. yesterday.

Last Thursday afternoon also in Barangay Bangbang, particulary in Sitio Kamunggayan, five others were also arrested in a buy-bust operation.

Gerald Callino, 28, was caught with suspected shabu worth P115,000 and P865 cash believed to be proceeds from the drug trade and P300 marked money.

Tajanlangit and Atillo and Sumagang allegedly yielded two small sachets of shabu each, while Sumagang had one small sachet of shabu.

Read Next
Isabelle Daza shows up in party as Gloria Diaz