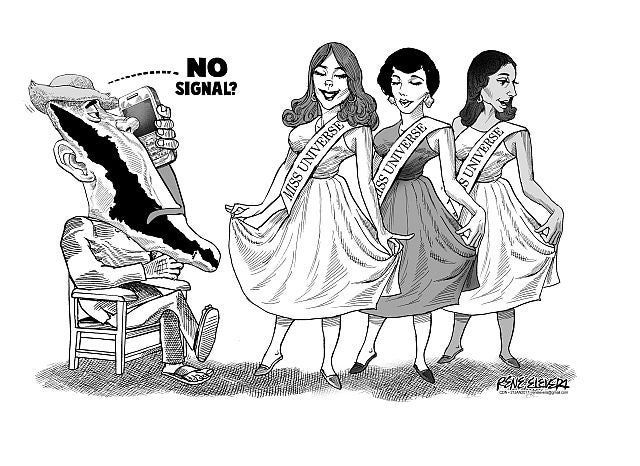 In the event of yet another cell site shutdown, the regional PNP office should make sure that it would only be limited to the venue of the major event being secured rather than the whole Metro Cebu area.

That is the sentiment of a lot of Cebuanos who were inconvenienced by yet another cell site shutdown ordered by the regional PNP office for the Miss Universe swimsuit presentation held in one of the resorts in Lapu-Lapu City.

What was supposed to be a cell site shutdown limited only to the venue of the Miss Universe event covered the whole of Mactan Island, according to Lapu-Lapu City Mayor Paz Radaza.

We hope and trust that Chief Supt. Noli Taliño, regional PNP chief, would not be arbitrary in his decisions to order — nay “request” — the regional office of the National Telecommunications Commission (NTC) to require telecom firms to shut down their cell sites in areas that he or his people deem to be security risks for terrorist attacks.

In times of emergencies, particularly during invasions or insurgencies, the first thing the enemy or state does is to shut down communications in order to render their targets, in this case the people, blind and confused.

In justifying the shutdown of cell sites during major events like the Sinulog or the Miss Universe swimsuit presentation, Taliño always plays up the security of the public as the overriding reason for the move.

Taliño can always point to the fact that people can still use landlines or go to the nearest internet café to upload photos or talk to loved ones, friends and coworkers online.

But not everyone can have immediate access to landline phones and internet cafés which would surely be crowded with users unable to use WiFi or mobile internet thanks to the cell site shutdown.

With the way Taliño is warning the people “to always be on alert” in case of terrorist attacks, he and other officials are indirectly helping the terrorists in creating and spreading an atmosphere of fear and uncertainty in sharp contrast to PNP chief Ronald “Bato” dela Rosa’s advice to the general public to resume their daily routine as if nothing had happened.

True, the bombing at Hilongos town, Leyte, and Davao City last year should not be taken for granted, but neither should it be used to constrict the public’s access to communication nor their movements.

There are signal jammers to block any attempts by terrorists to remotely activate their bombs by cell phones, but apparently Taliño and the police choose to ignore this and continue with their “request” for a total cell site shutdown even beyond the venue of the major event.

The PNP and even the military should craft a protocol in coordination with stakeholders like telecom firms on the parameters of cell site shutdown to avoid depriving the public of their right to easy access to mobile communication.

Read Next
Indignation against Trump and animal cruelty