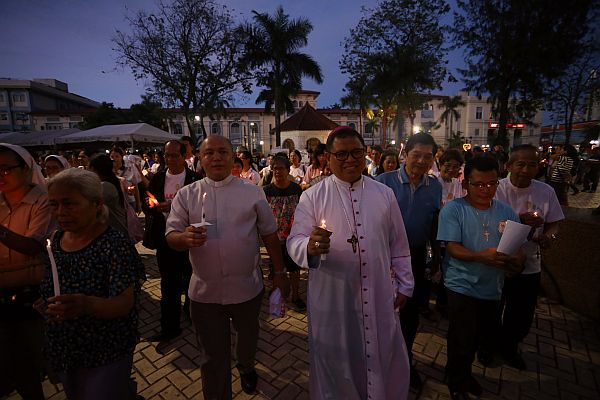 Rev. Fr. Eligio Suico, Bishop Oscar Florencio, and Cebu City North District Representative Raul Del Mar were among those who joined the “Walk for Life” event last Saturday in Cebu. Anti-death penalty advocates expect a much bigger crowd next month as the battle against the reimposition of the death penalty in the country continues.
CDN PHOTO/LITO TECSON

PRO-life advocates in Cebu, who have not given up just yet on the uphill battle against the reinstatement of the death penalty in the Philippines, expect a much bigger crowd to join them next month in another activity which they plan to hold.

Tentatively set on March 25 to coincide with the Feast of the Annunciation of the Virgin Mary or the day Angel Gabriel told Mary that she was going to conceive the Child Jesus, the event will be called “March for Life”.

“We will have a bigger crowd. Hopefully, death penalty won’t be reinstated by then. If that happens, then maybe we can settle with other issues. As much as possible, we’ll do everything we can (to stop it). Our leeway, though, is that pro-death penalty lawmakers will have a hard time at the Senate,” Dr. Rene Josef Bullecer, vice president of the Council of the Laity in the Visayas, told Cebu Daily News in a phone interview.

Bullecer, who was the lead convenor in Saturday’s event called “Walk for Life,” said they expect the crowd in March to be 20 to 50 times more than the last one.

Only around 800 people joined last Saturday’s walk against the reinstatement of the death penalty, but the pro-life leader said that this wasn’t an indication that their cause was a losing battle.

Bullecer said that between now and next month, different religious organizations will go full blast in their information campaign for the upcoming march.

While majority of the Philippine population profess to be Catholics, Bullecer lamented that only 16 to 20 percent actually go to church regularly.

He pointed out that most Catholics show their faith through devotion, but do not stand up for their beliefs once their religion needs to be defended.

“For me, having been a pro-life leader for more than two decades, that is what I saw as the single biggest obstacle,” he said, adding that those who criticize him for standing up against death penalty are also Catholics.

Bullecer said that millions join religious processions, but when Catholics are asked to defend their faith, “only 800 show up.”

At dusk on Saturday, at least 800 people walked from the Cebu City Hall grounds down to the Cebu Metropolitan Cathedral, carrying lighted candles and turning to prayer in the hope of stopping the reinstatement of the death penalty and the spate of extrajudicial killings amid the government’s war on drugs.

Bullecer said that if parishes in Metro Cebu will send even just 200 to 500 delegates for next month’s activity, they will be able to achieve their target of a much bigger crowd.

Participants of the recent weekend walk were Catholics but Bullecer said he hopes the next activity will be ecumenical and open to anyone who believes in the sanctity of life.

“As we strengthen the foundation of the Catholic faith, we should also extend the hand (to those with different beliefs). Once the law (reinstating death penalty) is passed, it will affect everyone, regardless of religion. We need to ask for the sympathy of our non-Catholic brethren,” he said.

Bullecer also called for “cleansing” within the church hierarchy, saying that while the leaders of the Archdiocese of Cebu are very vocal about their position against the reinstatement of death penalty, many in the clergy remain non-committal.

Lay men and women are also encouraged to write directly to their congressmen or congresswomen to express their stand on the reinstatement of death penalty, he added.

Since it is crucial to gain allies in Congress, bishops in Cebu are conducting their own “toktok-hangyo (knock and plead) operations” on representatives within their jurisdiction.

“They will call the attention of congressmen in Cebu in a very cordial manner since all of them are Catholics. It’s not necessarily a loyalty check, but a simple reminder that they are Catholics on top of everything else,” the pro-life leader said.

Of the about 150 votes needed in the House of Representatives to stop the revival of the death penalty, pro-life advocates said, so far, they only have the support of about 50 congressmen.

Bullecer added that if bishops all over the country will be able to convince 50 to 70 more congressmen, it will be favorable for them.
“We are hoping against hope, but we still believe in miracles. God will do the rest,” he said.