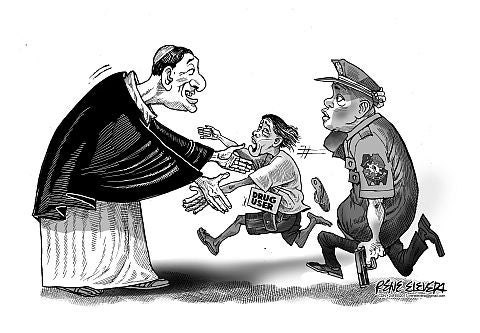 Leave it to Manila Archbishop Luis Antonio Cardinal Tagle to make eloquent discourses on spiritual and temporal issues, and last Saturday’s speech at the Luneta rally was no exception.

He coined the church’s opposition to the war on illegal drugs and the revival of the death penalty in three words: Lakas hindi dahas (strength, not violence), and though the distinction between the two is almost imperceptibly thin given how strength is often equated with violence, even the simplest Filipino wouldn’t fail to understand the difference once Archbishop Tagle explains it to them.

Despite this, not a few people would immediately and roundly condemn the drug users and drug syndicates who continue to menace the country and support decisive action that, as defined by the current administration, involves ruthless violence without regards to due process.

A line spoken by Henri Ducard, the character that would eventually be revealed as villain Ra’s Al Ghul in the film “Batman Begins,” reflects this dangerously cynical attitude towards crime and criminality: criminals mock society’s laws and thrive on the indulgence of society’s understanding.

Such a mind-set means that criminals, especially drug users and traffickers, will simply cast aside any aspersions to reform and rehabilitate in favor of doing the same crime over and over again, confident in the knowledge that they will be given second and countless chances to change for the better.

But like the Batman character who se vigilante violence is tempered by his one rule not to kill, and those in real life who believe that criminals must be dealt with severely but within the ambit of the law, reform and rehabilitation still remain a viable, even better alternative than outright executions.

Cebu Archbishop Jose Palma was among the church leaders who spurred the community to launch programs for this purpose, and we hope that the church will continue to press on and win over public support for their “active nonviolence” without sacrificing due process.