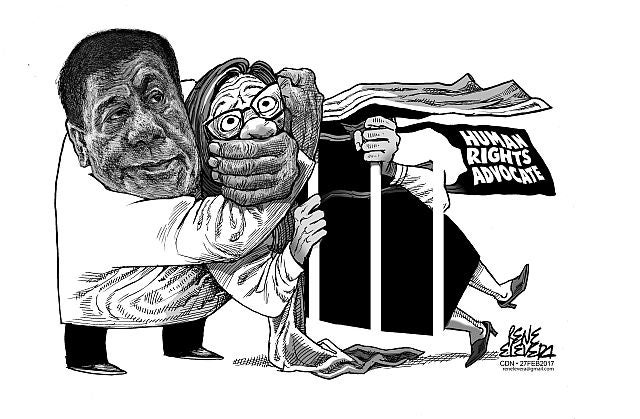 The worst mistake the Duterte administration can now make besides that heinous kidnap and murder of a South Korean businessman right inside the PNP’s Camp Crame headquarters is to make a martyr out of Sen. Leila De Lima.

Fighting back tears, the feisty senator and most vocal critic of President Rodrigo Duterte said it was “an honor” for her to be jailed for “what she was fighting for” which is an end to the extrajudicial killings that claimed among other lives a mayor in Leyte province who was detained and had no chance to overpower a gang of police operatives despite claims that he was armed.

The President’s fiercest supporters, who held rallies in support of his administration in the past few days, would snicker and criticize the “drama” surrounding De Lima’s arrest and eventual detention and denounce any attempts to criticize him as part of a larger, darker destabilization plot meant to oust him.

Exactly how many times can they foist this propaganda line to the rest of the Filipinos without it wearing too thin and losing its currency to the public, who are now watching how the President and his people will handle De Lima’s detention and prosecution.

The obvious strategy is to silence the senator to submission, to render her inoperative and make her an example to the opposition who rose for one brief moment in solidarity with De Lima as she was processed for detention.

The main sticking point for the administration’s argument for the senator’s detention is the President’s accusation without any solid incontrovertible evidence that De Lima has benefited from illegal drug money that she used to finance her candidacy for the Senate.

But even without said hard evidence and only the questionable testimonies of convicted drug dealers as fodder for their case against her, the Duterte regime had succeeded in securing an arrest warrant for the senator who is now in no visible danger of seeing her Maker anytime soon.

De Lima’s arrest and imprisonment is also seen as karmic payback by the camp of former president Gloria Macapagal Arroyo, who was arrested while en route to the Ninoy Aquino International Airport (NAIA).

Right now, Sen. De Lima’s arrest and detention had the same polarizing effect as President Duterte’s volatile handling of issues hounding his administration, though his supporters would claim public opinion is for her incarceration due to her alleged links to the illegal drug trade and drug lords.

But right now, while she is being tried for charges against her in court, the Duterte administration should be held accountable for whatever happens to her and that means ensuring her safety.

Her arrest should also serve to further stoke the Filipinos into being vigilant and look beyond the personality occupying the country’s highest post and protect the country’s freedoms instead.

Read Next
Reminiscing EDSA in 1986