Palma forgives Digong on tirades, says they are untrue 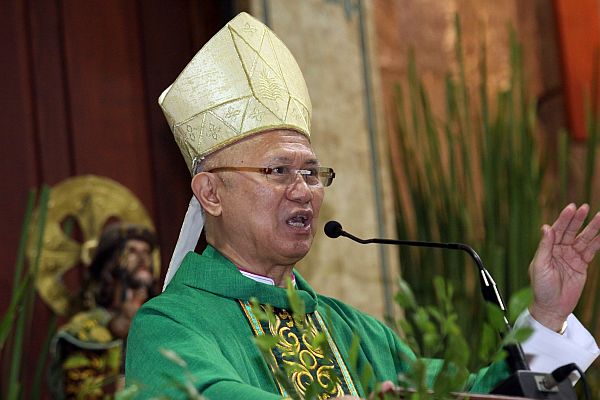 This was the response of Cebu Archbishop Jose Palma to the latest profanity-laced tirades thrown by President Rodrigo Duterte against Catholic bishops and priests who were critical of the administration’s war against drugs that claimed the lives of more than 7,000 drug suspects.

Palma, 66, said he was not hurt by the President’s criticisms against Catholic Church leaders, saying they were untrue.

“If the statements are untrue, why should we get hurt? As Church people, we have to forgive and we should forgive him,” he said in an interview after presiding Mass to celebrate the 103rd birthday of the late Cebuano Bishop Teofilo Camomot whose cause for sainthood is being processed by the the Archdiocese of Cebu.

The diocesan process–the first of many steps to be undertaken for a person to be declared a saint–was completed on Thursday.

It will be submitted to Rome for approval.

Thousands of people trooped to the Daughters of Sta. Teresa compound in Barangay Valladolid, Carcar City where the tomb of Camomot is located. Camomot was known for his extreme generosity and holiness.

Palma urged the people to pray for President Duterte who was given the mandate to govern Filipinos.

He said the country’s top executive maybe hounded by problems.

Contrary to what the President said, Palma stressed that the Catholic Church has done many things to uplift the lives of people, only that they were not well publicized.

“A lot of things are done by the Church even long before he (President Duterte) assumed the presidency.

But we don’t let our left hand know what the right hand is doing,” he said alluding to Jesus Christ’s teaching on genuine charity.

“I believe the President knows what the Church has done. Sometimes, he doesn’t mean what he says or even changes what he says. Deep in our hearts, we know we have done quite a number of things for the good of the people,” he added.

On Friday morning, Palma led the graduation rites of the sixth batch of drug surenderers who underwent a center-based drug rehabilitation program known as Surrender to God in Liloan town, northern Cebu.

Since last July, about a hundred drug surrenderers were cleared of drug use after they underwent a program by the Surrender to God and the Lahat Labang programs of the local church.

Two weeks ago, Palma launched the Cebu Archdiocesan Program for Drug Dependents to expand the Church’s program to save drug surrenderers. Palma said the Catholic Church is not against President Duterte’s war on drugs but on how it is implemented.

So far, about 7,000 drug suspects were killed either in police operation or by unknown assailants.
“If the President believes that killing people is the way to solve the drug problem in the country, we in the Church believes otherwise. We will not stop talking what we believe is right and true because that’s our mandate,” he said.

“A lot has died. In the end, history will judge him,” he added.

And why does the priests and bishops uses golden chalices instead of wood, Palma said “wood easily gets rotten.” “We use materials that would last long,” he explained.###