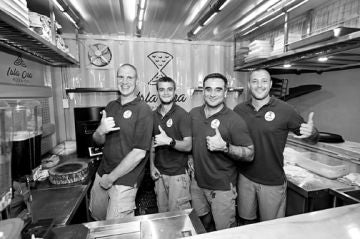 With new restaurants and food places sprouting at almost every corner of the metropolis, now is considered a great time for entrepreneurs to capitalize on the rising market in Cebu.

New kids on the block, the people behind Isla Ora Pizza Co., however, said they aren’t here to compete with existing players but to further expand the growing number of food enthusiasts here.

“The truth is, everybody wants pizza. Most people in Cebu love pizza, and the people are still learning what good pizza is. Do not get me wrong, there are a lot of good pizza places here, but we are not here to compete with them. It’s a huge rising market and the Philippines is growing at a very fast pace,” Christopher White, the company’s founder and chief executive officer, told Cebu Daily News.

White said Cebu is a platform where one can do “really neat things” and being here is an “exciting time.”

He said that the food scene in Cebu is phenomenal as well.

Only last year, Isla Ora sold its products in a stall at weekend food market Sugbo Mercado in Cebu IT Park, considered to be the largest and most popular of its kind in the city.

Public response was so overwhelming, White said, that they decided to set up shop in a leased property within a community in Barangay Kasambagan, Cebu City after three months.

“Sugbo Mercado was a great business incubator in the food industry. I highly recommend the market if someone wants to pilot their ideas and meet other entrepreneurs,” said White.

Its 600-square meter property along President Roxas Street houses the store, complete with locally sourced bamboo tables and chairs, a commissary, and an office.

What makes Isla Ora’s store unique is that it is an 80-foot shipping container turned into a pizza restaurant, equipped with a high-tech oven that can bake delicious Napoleon-style pizza in under two minutes.

At present, Isla Ora has a set six-item menu, including best-sellers All-Meat and Bantayan Island Crab, sold at P145 to P295, depending on size and variant.

To date, White and his partners have already invested about P5 million for a commercial kitchen, equipment, franchise office, two locations, branding, research and development, as well as staff training.

They have also set up a second pizza outlet at the Mandaue Reclamation Area in front of the Cebu Doctors University.

White said they plan to put out the concept for franchise by 2018 while this year will be focused on expanding the business to places in the city with high foot traffic.

“Our company plans to have 10 locations out before we actually franchise the concept. That way, we can iron out the kinks and make sure it is really well and its operations are as best as they can be before we start taking on franchise owners,” he said. 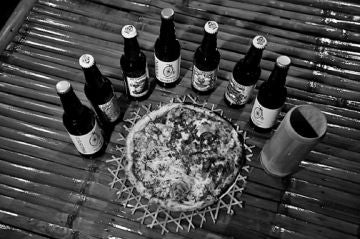 One of the store’s pizzas paired with local craft beers.

He said they are having discussions with major malls in the cities of Cebu and Mandaue, but they can just easily deploy a container van at any good parking lot owned by other establishments.

Isla Ora, which is Spanish for “Island Time,” was inspired by the culture and lifestyle of those living on Bantayan Island in northern Cebu, the place where the idea to set up the pizza business originated.

White, a 36-year-old former consultant of a tour agency in China, came to the Philippines in 2013 to help rebuild Bantayan Island after it was ravaged by Super Typhoon Yolanda in November that year.

Born and raised in Hawaii in the United States of America, White had been working in China for four years when he first discovered the beauty of the Philippines while touring with clients.

“I just fell in love with the country,” he said, adding that it devastated him when he heard about what happened to the Visayas in the wake of the super typhoon about four years ago.

White was among the pioneers of YPDR, a non-profit organization registered in the Philippines and the US that helped bring Bantayan back on its feet by repairing classrooms and building homes for survivors.

He said that while there were donations from kind sponsors, most of the money YPDR volunteers used to fund their projects were from their own pockets. 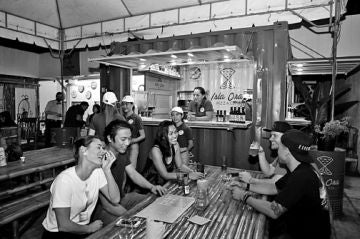 Customers enjoy the food, the beer, and each other’s company at Isla Ora.

After months of rebuilding, White and his friends, some of whom became the founding members of Isla Ora Pizza, took jobs as consultants for disaster response in Micronesia. They had temporarily settled in Cebu and consultancy work allowed them to earn on the side, but they had to fly in and out of the country every now and then.

Out of the group’s desire to stay in the Philippines and continue helping the residents of Bantayan Island without leaving for consultancy work, Isla Ora was born as a means to support their advocacy.

Half of Isla Ora’s 20-member staff are from Bantayan Island while there are close to 20 local vendors included in its supply chain, such as suppliers of craft beer, coffee, hot sauce, bamboo plates and cups, bamboo place mats, and other homegrown products.

“For us, it’s not so much about the money. Well, we need money because it’s a business, and we need to pay the bills, but it’s more of empowering the youth and helping them grow with the company. It’s also about watching vendors the company brings in (to) rise with us,” he said.

Read Next
Two titles in the bag for Cebuano Cuizon