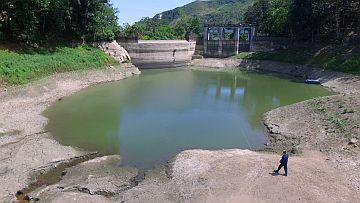 Buhisan Dam, one of the major sources of water for Metro Cebu, normally produces 5,000 to 7,000 cubic meters of water per day. With the onset of the summer months, the dam’s water supply has started to fluctuate, prompting the Metropolitan Cebu Water District (MCWD) to issue a “store water advisory” to consumers.
CDN FILE PHOTO

As Cebuanos brace themselves for the sweltering heat of summer and with fewer rains recorded these days, Cebu City’s water supply again started to dwindle.

The water level in Buhisan Dam — one of the main sources of water in Metro Cebu located in the hilly lands of Cebu City — has been fluctuating, said the Metropolitan Cebu Water District (MCWD).

MCWD advised areas serviced by the dam to start storing water during off-peak hours when supply is not as problematic.

According to MCWD Public Relations Manager Charmaine Rodriguez-Kara, water in the dam dropped to 6.9 meters from the crest or the top of the dam last March 1.

However, the supply went back to 5.9 meters last March 8, and then better at 5.65 meters from the crest last March 15.

If the dam’s water level goes down to 9 meters from it’s crest, it will be considered critical by MCWD as it will go below the dam’s discharge pipe and no longer flow to the Tisa Filter Plant.

Even with the slightly improved water supply levels, Kara said that increasing demand for water has resulted in problems in the supply chain in areas serviced by the dam during peak hours from 6 a.m. to 10 p.m.

Beginning Thursday, MCWD implemented a distribution management plan for the uplands of Barangay Capitol Site and monitored the demand and the usage hours of consumers within the area.

Under the scheme, consumers are given a time frame within which water can be expected and are told to store water for their needs between 12 midnight to 5 a.m.

MCWD issued a “store water advisory” for these areas in order to avoid inconvenience beginning March 1.

Association of Barangay Councils (ABC) President Philip Zafra, who is also the barangay captain of Tisa, said that so far, Cebu City village officials have not yet sounded the alarm for lack of water.

But Zafra expects supply problems at the start of April.

City Hall’s Department of Public Services (DPS) is ready to ration the commodity in the upland areas of Cebu City, according to DPS Chief Roberto Cabarrubias.

“We are prepared in case there is a need for water rationing. We will be meeting and we will identify the areas of concern,” Cabarrubias said.