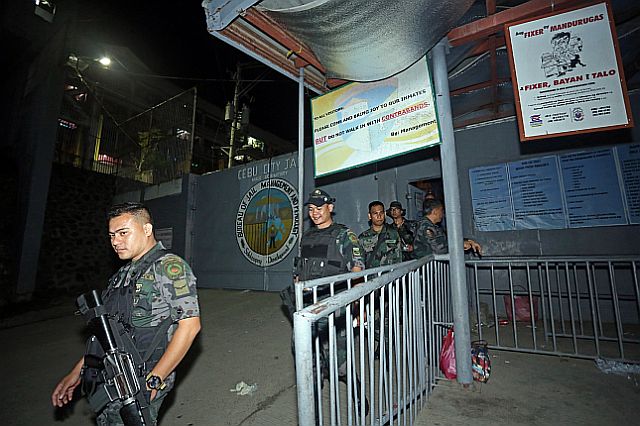 Cebu City police officers in full battle gear leave the Cebu City Jail after participating in the Operation Greyhound at the facility. Several contraband including drugs were confiscated from the inmates during Saturday’s surprise jail inspection. (CDN PHOTO/LITO TECSON)

At least five grams of shabu worth at least P30,000, nine cellular phones, assorted drug paraphernalia, bladed weapon and notebooks that contained some names were seized in a raid inside Cebu City Jail past 1 a.m. on Saturday.

The surprise jail inspection or Operation Greyhound was conducted six months after the last one was done where cash worth P4.7 million, several kilos of shabu, Nubain, cell phones, bladed weapons, flat screen TVs and drug paraphernalia were confiscated.

Yesterday, the Philippine Drug Enforcement Agency in Central Visayas (PDEA-7) conducted the operation after the Cebu City government asked the anti-illegal drug agency to do the surprise inspection at the Cebu City Jail.

“There were reports that illegal drugs continued to be brought inside the jail. And so we conducted an operation,” said PDEA-7 Director Yogi Filemon Ruiz.

This time around, the biggest catch of the PDEA agents is a notebook with a list of names of people who sourced drugs from a detainee in the jail.

Ruiz refused to name the inmate, but he said that the owner of the notebook was a big-time drug lord in Cebu City.

“We are now conducting further investigation and verifying the names in the notebook. Written there are names that he (the inmate) supplied illegal drugs including cash remittance,” Ruiz said.

A cellular phone was also seized from the possession of the detainee.

Ruiz said that the inmate was arrested and detained for illegal drugs four years ago.

However, with only a few grams of suspected shabu being found at the jail during the operation, Ruiz said he suspected that the inmates were informed about the surprise jail inspection in the facility.

His suspicion was boosted with a paper placed on the cabinets of one of the inmates asking them not to destroy the cabinet because there were no contraband inside it.

The CPDRC raid sparked controversy and later investigation by the Commission on Human Rights after male inmates were stripped naked and hurdled in the quadrangle for security purposes.

Unlike the CPDRC raid, Ruiz said not all inmates of the city jail were asked to remove their clothes.

“Those whose shirt are not capable of concealing bladed weapons were no longer asked to remove their clothes but (there) were still those who were requested to strip off their clothes in order not to put the lives of our operatives at risk,” he said.

The operation was also a joint operation of PDEA-7, the Cebu City Police Office and the Bureau of Jail Management and Penology.

Last August’s Greyhound Operation, where several contraband were found, led to the relief of 30 jail guards and then jail warden Supt. Johnson Calub.

Supt. Jessie Calumpang, the current jail warden, repeatedly said that they had a hard time monitoring contraband brought inside the jail due to the number of inmates inside the facility.