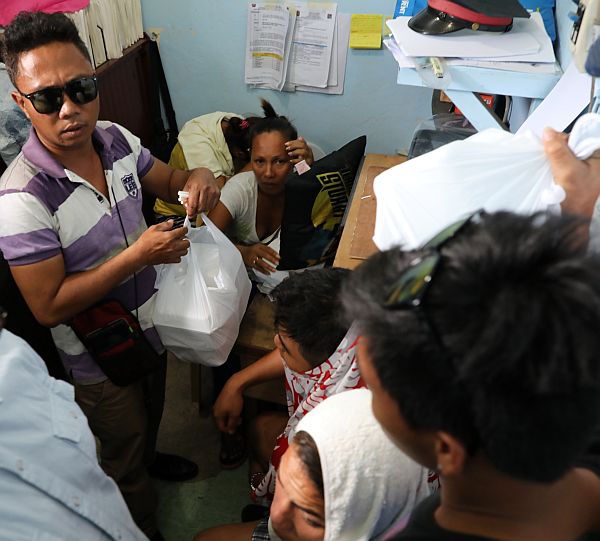 Friends of the alleged kidnappers rushed to the Minglanilla Police Station upon hearing news of the incident. They brought with them food to help comfort their friends whom they say were wrongfully accused. CDN PHOTO/TONEE DESPOJO

THE Minglanilla olice will only file a child abuse complaint against the six individuals who were arrested last Thursday for allegedly attempting to kidnap four students of the Minglanilla Central School.

Chief Supt. Dexter Calacar, Minglanilla police chief, said that they had ruled out filing a kidnapping complaint against the the six arrested persons.

He, however, said that they would file a complaint for violating Republic Act 7610 or the Anti-Child Abuse Law because the four students were traumatized with what happened to them.

“Kursonada g’yud ang mga ginikanan nga mo-file og kaso kay naa bayay incident na nga kidnapping sa Minglanilla sa nilabayng mga tuig (The parents of the students are determined to file a case since there was a case of kidnapping in Minglanilla a few years back),” said Calacar, who was referring to the Ellah Joy Pique, the six-year-old girl, who was kidnapped in 2011 while walking home from the Calajoan Elementary School in Minglanilla and was found dead later.

He also said that they were studying if they could instead file an abduction case against the arrested suspects.

The six suspects, three of them women, were arrested by Minglanilla policemen after they were accused of attempting to kidnap four girls, all elementary school pupils, at around noontime of March 16.

The arrest came after the kids’ parents and a teacher reported the alleged attempt to kidnap the young girls who were classmates.

The suspects also earlier denied the allegations, saying they were wrongfully accused.

The four Grade 4 students, whose ages range from 9 to 11 years old, earlier recounted the alleged kidnap attempt incident to the police.

They said that they were about to enter the school when one of the suspects approached them and asked about the whereabouts of the guava vendor.

But then the man, who was later identified as Paradela, allegedly grabbed one of the girls by the hand and ordered them to go with him and ride the van.

He was allegedly referring to a white L300 van nearby.

The girl, however, managed to free herself from the man’s grasp and ran to their classroom where they informed their teacher and their parents about incident, who then reported it to the police. This led to the operation in the City of Naga and the
suspects’ arrest.