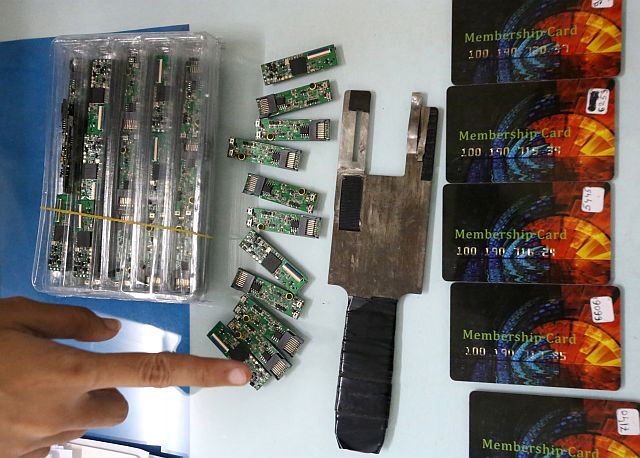 Claiming innocence and stuck in detention with close to P2,000 worth of sandwiches, donuts and coffee for lunch from a popular coffeehouse chain, the three Romanian nationals who were arrested in relation to the series of unauthorized automated teller machine (ATM) withdrawals in Cebu denied having a hand in the controversy.

Ionut Alexandru Mitrache, 31; Costel Ion, 30; and Razvan Aurelian Stancu, in his 30s, claimed they were victims of mistaken identity.

“We’re not involved in this one. No one of us is,” Mitrache told Cebu Daily News.

Speaking on behalf of the two other suspects, he urged the National Bureau of Investigation in Central Visayas (NBI-7) to get the right targets instead of allegedly “sacrificing” them to solve the issue.

“Chinese people look the same. But not us Romanians. The persons on that CCTV (footage) are not us,” he claimed while sitting down in a double-decked bed inside the NBI-7 stockade.

Mitrache said they came to Cebu about a month ago for an official business and not to defraud people.

“We are investors,” he claimed without elaborating. He then refused to issue further statements.

But records from the condominium they were staying in showed they had been living in the building for about a year, with their source of income a mystery, according to NBI-7 Special Investigator III Florante Gaoiran.

This made the NBI suspect that the three Romanians, who entered the country as tourists, have been engaging in the ATM skimming scheme for about the same amount of time, defrauding an undetermined number of depositors.

Gaoiran said they also found in the room inside their condo unit some materials, including numerous card reader microchips, that raised doubt on the authenticity of their claim that they did not know anything about ATM skimming. 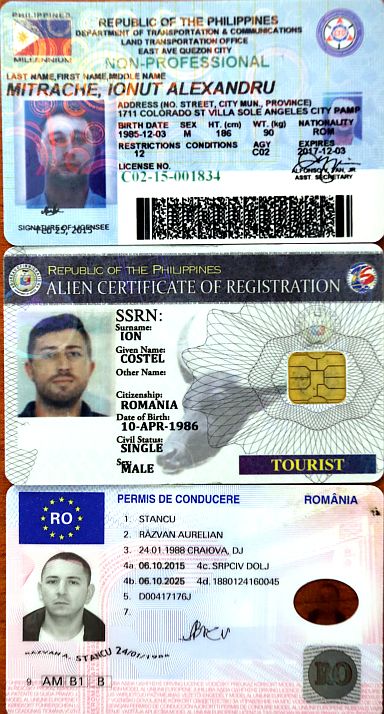 The National Bureau of Investigation releases on Saturday the photos of the ID cards and driver’s license seized from the three Romanians linked to the series of ATM skimming incidents that victimized Land Bank of the Philippines depositors. (CDN PHOTO/JUNJIE MENDOZA)

The three Romanians were arrested by agents of the NBI-7 on Friday after their facial features matched those of the suspects who allegedly installed skimming devices at the ATMs of Land Bank of the Philippines (Landbank).

The bureau was able to get a copy of the footage of the closed-circuit television (CCTV) cameras installed near at least three ATMs of Landbank in the cities of Cebu, Mandaue and Lapu-Lapu.

Records of the Land Transportation Office traced the vehicle to the Cebu City condominium where the suspects were staying, said Gaoiran.

The vehicle, categorized as a luxury car, costs P2.5 million, according to the price quoted in the Ford Philippines’ website.

Also recovered was a polo shirt which appeared to be the same clothing worn by one of the skimmers, as captured by the CCTV.

The NBI also confiscated the suspects’ brand-new red Ford Mustang sports car, the ownership of which still has to be verified with the Land Transportation Office (LTO).

Charges for violating Republic Act 8484 or the Access Devices Regulation Act of 1998 will be filed against the suspects before the Cebu City Prosecutors’ Office on Monday.

Gaoiran said Landbank will act as the main complainant while depositors who fell victim to the suspects can file theft charges.

He appealed to victims of ATM skimming to come to the NBI office to file a formal complaint against the suspects.

“I understand the case to be filed against the suspects is bailable. But if there are many complainants, then that would also increase the amount which they will need to pay,” he said.

Under the law, a person accused of making unauthorized ATM withdrawals can post a P20,000 bail to secure temporary liberty while the charges against him or her is tried in court.

So far, at least 50 depositors of Landbank, mostly government employees who have payroll accounts with the bank, complained they were skimming victims, losing thousands of pesos in salaries and saving deposits.

But as of yesterday, Gaoiran said not one depositor has visited the NBI to file a complaint against the suspects.

Once charges will be filed against the Romanians, he said the NBI will ask the Bureau of Immigration and the court to issue a hold departure order against the three so they would not be able to escape from their obligations. 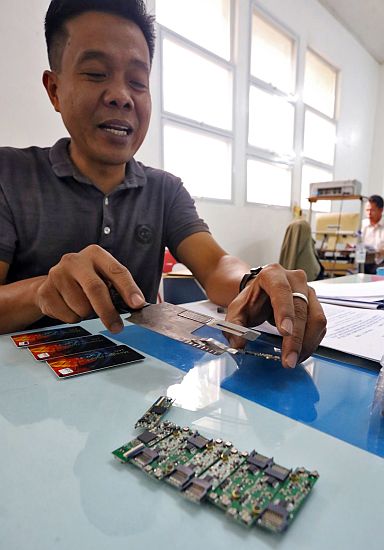 At lunch yesterday, the suspects requested an NBI personnel to buy them sandwiches, donuts and coffee from Starbucks, costing the foreigners nearly P2,000.

They also asked for mattresses and hygiene products like soap, toothpaste, toothbrush and toilet papers, which were also brought inside the NBI stockade upon their request.

Gaoiran said they are conducting a thorough investigation to determine whether or not the suspects have other cohorts in Cebu.

“For now, we have not identified other persons who are linked to their operations. But we continue our investigation,” he said.

At around 11 a.m. on Friday, the agents went to the condominium where the Romanians lived for about a year now.

Gaoiran said Mitrache and Ion were the first to arrive on board a red Ford Mustang sports car. A few minutes after, Stancu, the alleged IT expert of the group, came.

“We invited them for questioning to shed light why they were using the same vehicle seen on the CCTV footages. At first, they refused but they eventually went with us to the office,” he said.

The NBI-7 applied for a search warrant from the court so they could go inside the two rooms rented by the suspects for P100,000 each per month.

Judge Generosa Labra of the Regional Trial Court Branch 23 in Cebu City issued the warrant by late Friday afternoon, allowing agents to search the suspects’ rooms starting at around 6 p.m.

Contrary to Mitrache’s claim, records of the condominium where the suspects stayed showed that they came to Cebu about a year ago.

“If that’s the case, there is a possibility that they have been skimming ATMs for a year now,” Gaoiran said.

He said the NBI had to act on the case fast to stop the illegal operations of the suspects.

“There’s just a need to stop them. Fortunately, we were able to solve this case right away,” he said.

The NBI began investigating the series of ATM skimming on Wednesday upon the request of Landbank.

Gaoiran said the arrest of the three Romanians was a warning to other ATM skimmers to stop their illegal operations.

“They better not do it in the Philippines. Sooner or later, they will really be caught,” he said.

Gaoiran also advised banks to improve their security features so that skimmers won’t have the chance to steal money from other people’s savings.

Among the victims in the Landbank skimming incidents were policemen, two judges, a prosecutor, an army personnel and the regional director of the Population Commission in Central Visayas.

“With the number of victims that so far come into the open, I should say that the skimming incidents in Cebu have been alarming. Hopefully, there are no other persons out there who are into this kind of business,” he said.

Landbank’s investigation revealed that a skimming device has been installed in the Landbank ATM in Mandaue City. The management discovered it on Feb. 27 and removed it.

Traces of skimming were also detected in the Landbank ATM in Barangay Banilad, Cebu City.

As a precautionary measure, Landbank said it blocked over 2,000 accounts to ensure their safety.

Gaoiran advised depositors to monitor their ATM transactions at all times and to report to the banks or law enforcers any unusual deductions from their savings.

“Just be vigilant. If you observe any irregularities, report it right away,” he said.