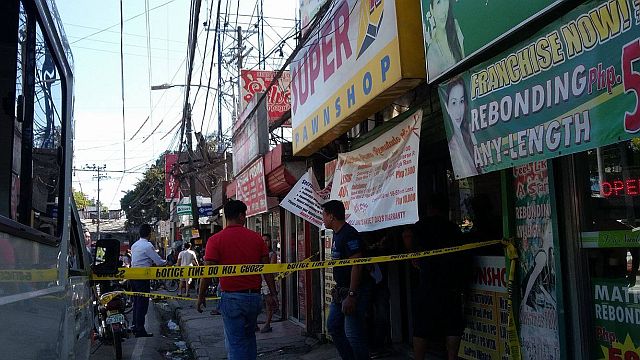 Super R. Pawnshop lost P422,820 worth of cellphones, jewelry and cash to armed robbers after they pretended to be customers inside the pawnshop. Police are still investigating the incident.
Benjie Talisic

TWO men posing as customers robbed a pawnshop along Gorordo St., Barangay Lahug, Cebu City at around 1:30 p.m. on Sunday and fled with nearly half a million loot.

Jinky Garciano, teller on duty, told police that while one man was inquiring about their products, the other man suddenly pulled out a gun and declared a holdup.

Lanie Gocucu, the owner of the pawnshop, refused to answer questions when sought for comment.

Gocucu, however, was coordinating with the police on the robbery incident.

Mandal said they were looking at several angles in the robbery including the possibility that the robbery was an inside job.

Mandal said that they were also coordinating with the Theft and Robbery Section and the Crime Scene Investigators of the Cebu City Police Office in investigating the robbery.