Abandoned car may be linked to ATM skimming suspects – Police 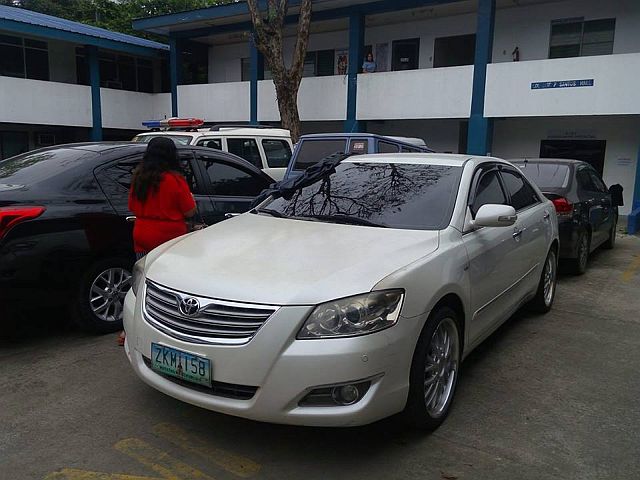 A white Toyota Camry with plate number ZKM 158 was abondoned in the parking area of Ayala Center Cebu believed to be owned by Romanian nationals who were arrested as prime suspects in the recent Landbank ATM skimming. (CDN PHOTO/JUNJIE MENDOZA)

CEBU CITY–The police Regional Intelligence Division (RID) recovered an abandoned Toyota Camry car believed to be owned by the three Romanian nationals who were arrested on suspicion that they were behind the series of unauthorized withdrawals of automated teller machines (ATMs) of a government bank.

The Toyota Camry with plate number ZKM 158 was turned over to the police on Sunday when no one came forward to claim the vehicle that was left at the mall’s basement parking lot on Friday.

It was the same car found opened by the security guards of Ayala Center Cebu while parked at the mall’s basement 2 on Thursday.

When they peeped through the windows that were rolled open, they found a bag full of money.

They took the bag and announced through a public address system that a car was left opened with a bag full of money inside. The bag was later claimed by two Romanians who counted the money in front of the security guard which amounted to P3 million, said Senior Supt. Jonathan Cabal, head of RID.

A day after, the security guards learned from news reports that the two Romanians who claimed the money were among those arrested by the National Bureau of Investigation in relation to the ATM skimming of Land Bank of the Philippine branches in Metro Cebu on March 17.

On the same day, Friday, the mall’s security guards noticed the same vehicle at the parking area. No one returned to claim the vehicle, prompting the mall security to call the attention of the police on Sunday.

Recovered inside the car were two laptops, Cabal said.

“Those laptops will be subjected to forensic exam. We don’t know yet why no one claimed the vehicle,” he said.

Based on the records of the Land Transportation Office, the car was registered to Sebastian Rama Oros who is based on Villa Aol Colorado Street in Angeles City, Pampanga.

“We are syill conducting an investigation. Perhaps the vehicle was rented or stolen,” he said.