RUNS IN THE BLOOD 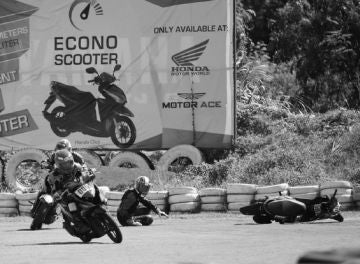 A rider falls after losing his balance while negotiating a curve in the Honda Cebu Dream Cup at the Kartzone track in F. Cabahug Street, Cebu City.
CDN PHOTO/LITO TECSON

The Andrin sisters, Cherry and Lovely, once again showed their mastery in running, as they took the top two spots in the women’s 10-kilometer race of the Dagan Para Sa Gatas Ni Nanay last Sunday in Lapu-Lapu City.

The younger Cherry claimed the top spot after crossing the finish line situated at Pueblo Verde’s The Outlets in 50 minutes and 53 seconds.

Michael Sardito rounded off the top three, finishing in 40:14.

Kenyan James Mebei, meanwhile, dominated the 5k men’s open with a time of 16:22.

Harold Kim Guiao settled for second place with a time of 17:07 while Brian Guillen placed third, finishing in 17:37.

The running event drew around a thousand runners. The run was organized by the Lactation Attachment Training Counseling and Help and Aboitizland.