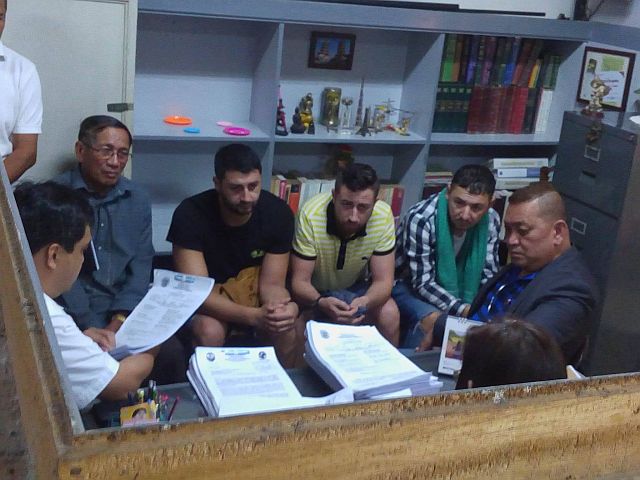 The three Romanians were accompanied by lawyers during the inquest proceedings at the Cebu City Prosecutor’s Office. (CDN PHOTO/NESTLE SEMILLA)

The three Romanians tagged in the series of unauthorized ATM withdrawals in the Metro Cebu branches of the Land Bank of the Philippines waived their right to a preliminary investigation at the Cebu City Prosecutor’s Office yesterday.

“So we will be evaluating all evidences at hand submitted by all complainants, and if probable cause exists, then we will be recommending the filing of the appropriate information in court,” said Maria Therese Casiño, Deputy City Prosecutor.

They were also accused of violating Republic Act 8484 or the Access Devices Regulation Act of 1998.

“There were two types of charges against them, (but there were) four different provisions of RA 8484. We will look it up as well,” Casiño said.

During yesterday’s inquest proceedings, the three Romanians said they have visited the country two to three times already.

Mitrache and Stancu claimed that they don’t know each other while they admitted that they are friends with Costel.

Christopher Ruiz, one of the lawyers of the Romanians, said the three suspects agreed not to submit a counter affidavit.

“Kay kun mo-sign sila og waiver, mabalik sa ilaha. Ma-prolong ilahang detention. (If they will sign the waiver, it will prolong the process and their detention period.) So they opted to answer all charges in court,” Ruiz said.

The regional National Bureau of Investigation (NBI-7) is verifying reports that two of the Romanians claimed ownership of the vehicle and the P3 million in cash found in it.