All for her parents 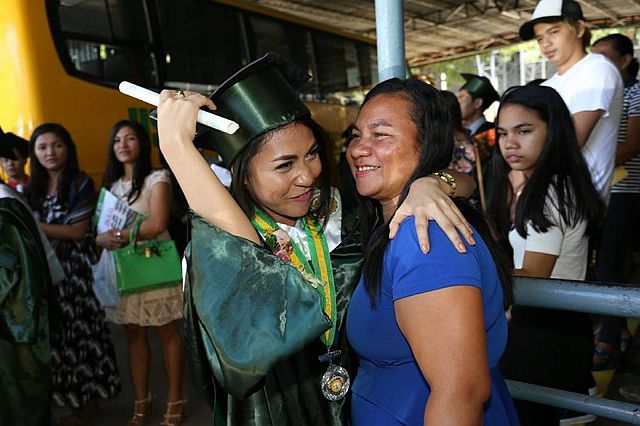 Clad in her toga with one hand holding her college diploma and a medal hanging on her neck, Regine Villamejor couldn’t help but cry when she hugged her parents after the graduation rites yesterday at the University of San Jose-Recoletos Basak campus.

“This (medal) is for my parents. (When I received the medal) I remembered all their sacrifices,” said 20-year-old Villamejor of Argao town in southern Cebu.

Her tears were not only of happiness for graduating from college but also to show her parents that their efforts to send her to college despite their financial constraints were worth it.

For her to continue studying in college, Villamejor recalled seeing her parents doubling their efforts to earn to fund her studies. 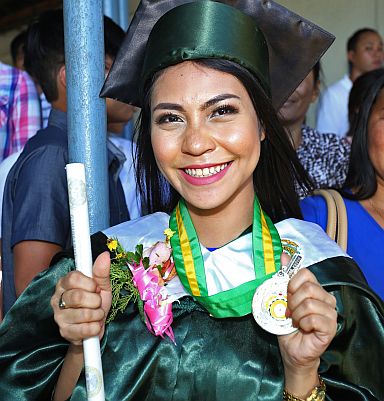 Her father, Raul, would work hard to bring home fish that her mother, Mary Jane, a fish vendor, could sell in Barangay Taloot in Argao.

She said that she also would help sell fish every time she would go home in Argao.

But of all the things that Regine wanted, graduating from college was at the top of her wish list.

She recalled the challenges including the times when she doubted whether she would be able to finish college because of the struggles that her family faced.

These include health issues that hit the family.

She recalled when her mother, Mary Jane, got sick in 2014 and months later in the same year she herself got sick and had to be admitted to a hospital.

She said that the family could only pray hard, and luckily, Mary Jane got well.

That year, she was then second year in college, she was diagnosed with internal hemorrhoids and she needed to undergo surgery.

This sidelined her from school for a week, which was the time she was admitted at the hospital.

Despite this, while at the hospital, she communicated with her classmates and worked on her projects so that she could keep up with her studies.

During yesterday’s graduation rites, Mary Jane couldn’t stop crying when she saw Regine walk on the stage and receive her diploma.

She said that she could not explain her feelings when she saw her daughter on stage wearing her toga. 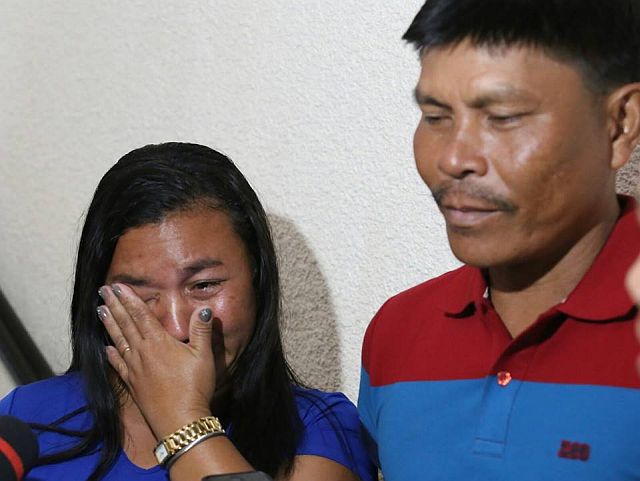 Mary Jane (left) wipes away tears of joy as she and her husband, Raul, watch their daughter receive her diploma on stage. (CDN PHOTO/JUNJIE MENDOZA)

“Wala ko kasabot sa akong gibati nga nakahuman na g’yud siya. Wa g’yud nako damha nga makaabot siya (Regine) ing-ani higayuna nga makalampos siya (I cannot explain my feelings now that she has finished her studies. I never expected her to achieve what she achieved that she completed her college studies),” she said as she sobbed.

Regine’s parents, who are both high school graduates, said they were proud of their daughter’s achievement.

“Dako kaayo akong pasalamat sa Ginoo nga nakahuman siya. Kay lisod kaayo mi. Abi nako dili siya kahuman kay managat ra tawn na akong bana ug maninda ra ko og isda (We are grateful to God for helping her finish college because of our financial constraints. I even doubted if she could graduate considering that her father is a fisherman while I am a fish vendor),” Mary Jane said.

Raul, Regine’s father, said he is grateful that Regine is a good daughter and he is proud of what she achieved despite their status in life.

He also said that with Regine graduating from college, he would let her decide on what to do next with her life.

For Regine, all her achievements are for her parents and family.

She said she would work hard in the future to help provide for the family and her two younger brothers.

Read Next
From ‘Best in Math’ to board topnotcher