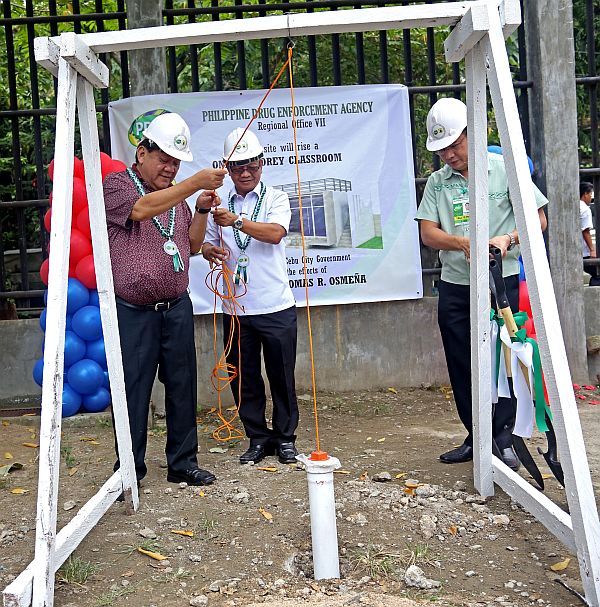 Cebu City Mayor Tomas Osmeña said he plans to put up a facility where former drug dependents will be assigned as handlers of specially trained dogs at the South Road Properties (SRP).

“I think it matches their character nga kulang sila sa pansin (that they want attention). They can smell another drug addict even without a dog. We have to try new things,” Osmeña said during the groundbreaking ceremony for a classroom at the Philippine Drug Enforcement Agency in Central Visayas (PDEA-7) on Tuesday.

With 100 K9 dogs, the mayor said Cebu City no longer has to rely on Manila to train K9 units.

In support of PDEA-7’s campaign against illegal drugs, the Cebu City government will pay for construction of a classroom where anti-drug awareness lectures and similar activities will be held.

Another PDEA-7 building will also be built with the help of the Mandaue Chamber of Commerce and Industry, and funds provided by Senator Antonio Trillanes VI.

PDEA Director General Isidro Lapeña thanked the city government for its continued support in the campaign against illegal drugs.

He said the government’s war on drugs must not only concentrate on suppressing the supply but also give equal importance to efforts along demand reduction.

“The first step towards change is awareness. We educate and create anti-drug awareness among the people with the intention of generating their support and finally mobilizing them against dangerous drugs,” he said.

Lapeña said the war on drugs should start in every barangay and household.

He said they are investigating several barangay captains, including some in Central Visayas, over their alleged involvement in illegal drugs.

From January to March 2017, PDEA-7 conducted 48 anti-drug operations that resulted in the arrest of 125 drug personalities and confiscation of 15.53 kilos of shabu, 192 ml of nubain, and 21,000 pieces of marijuana plants.

Read Next
LPA to bring rains to Cebu