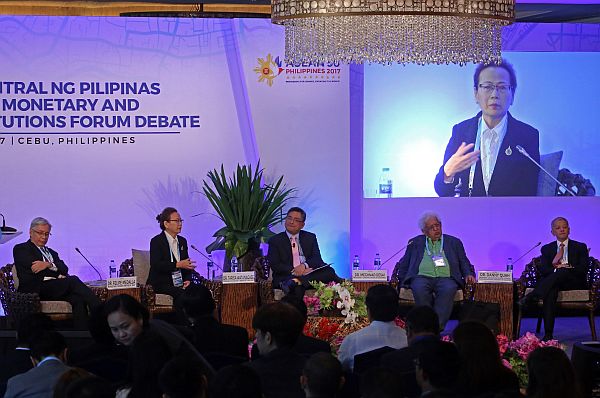 Heavy rains poured and major thoroughfares were flooded as delegates of the Association of Southeast Asian Nations (Asean) summit meetings arrived in Cebu on Monday for a week-long gathering.

But the knee-deep floods which covered several streets of Lapu-Lapu City, where the meetings were held, failed to disrupt any of the events even as traffic was stalled in the metropolis.

Despite delayed flights from Manila to Cebu due to heavy rains, around 300 finance ministers and central bank governors from Asean member-states converged on Mactan Island.

From the MCIA, the delegates, escorted by police patrol cars, were quickly brought to their billeting areas, breezing through wet roads and busy intersections where the rest of the riding public waited as Cebu’s guests passed on their way to Shangri-La Mactan, Be Resorts, Crimson Resort, Waterfront Hotel and Casino Mactan, Movenpick Hotel and Jpark Island Resort in Lapu-Lapu; and Radisson Blu in Cebu City.

Ankle- to knee-deep floods covered several Lapu-lapu City streets, including Barangays Ibo and Basak — parts of the Asean delegate route — which were packed with stranded motorists.

Canals overflowed and murky waters entered several homes in low-lying areas during the four-hour downpour which began at 4:15 a.m. and ended at around 8 a.m.

According to state weather bureau Pagasa, the early morning rains were experienced in Metro Cebu and parts of north and south Cebu. The heaviest rainfall was recorded at 5:08 a.m.

Alfredo Quiblat, head of Pagasa Mactan, said the rains resulted from the convergence of the northeasterly and easterly winds.

“Expect intermittent rains until Wednesday,” Quiblat said, adding that more floods should be expected as well with the unusual amount of rainfall.

Yesterday’s downpour was experienced in the cities of Cebu, Mandaue, Lapu-Lapu, Talisay, Naga and Toledo; and the towns of Cordova, Consolacion, Liloan, Minglanilla and Pinamungahan.

The incessant rain caused knee-deep flooding at the foot of the old Mandaue–Mactan Bridge, causing a traffic build up in the area and connecting roads.

Vehicles passing by the area along A.C. Cortes Avenue had to slow down to prevent accidents while several small vehicles conked out after their engines were soaked in floodwater.

Vehicles coming from the Marcelo Fernan Bridge were also greeted by floods along Plaridel Street, compounding traffic problems at the old bridge.

Vehicles using the national highway in Mandaue City were also forced to slow down upon reaching the vicinity of Barangay Tipolo because of huge water deposits in the area.

The Department of Public Works and Highways (DPWH) was called in to suck out flood waters and clogged canals to reduce flooding caused by accumulated garbage at the outfall of the drainage network.

“It was a good thing that the floods and traffic already subsided when the Asean convoy passed by at around 11 a.m.,” said Antigua.

Classes were suspended at the A.S. Fortuna Memorial Elementary School after a nearby canal overflowed, causing knee-deep floods to enter classrooms.

Dozens of commuters were stranded after some jeepney drivers refused to ply their routes due to the floods, Tumulak said.

No landslide was reported but the rains affected the commemoration of the historic Battle of Tres de Abril in Cebu City as organizers were forced to transfer the ceremonies from the marker in Tres de Abril to the Rizal Memorial Library along Osmeña Boulevard.

The 3rd Asean Finance Ministers’ and Central Bank Governors’ Joint Meeting and Related Meetings were meant to tackle regional arrangements including financial integration and cooperation especially against the backdrop of a new wave of protectionism and other uncertainties in the global economy.

This week’s series of meetings until April 7 kicked off with a debate at 4 p.m. hosted by the Bangko Sentral ng Pilipinas and the Official Monetary and Financial Institutions Forum (OMFIF) which revolved around the question — “Is Asia bound to follow the advanced economies’ ‘new mediocre?’”

The debate was held at Shangri-La’s Mactan Resort and Spa, which is around 8 kilometers away or a 23-minute drive east of the MCIA.

Due to delays brought about by the weather earlier in the day, the event started around 20 minutes late, but still ended on time.

Members of the forum engaged in a conversation on whether Asia’s strengths can withstand the impact of weak external demand, spillovers from advance economies’ unconventional monetary policies and exchange rate pressures coming from these developments.

Among the guests speakers during the forum were Lord (Meghnad) Desai, professor at the London School of Economics and Political Science; Felipe Medalla, Monetary Board member at BSP; Danny Quah, professor at the Lee Kuan Yew School of Public Policy, University of Singapore; and Tarisa Watanagase, former governor of the Bank of Thailand.

BSP Governor Amando Tetangco Jr. gave the opening remarks, in which he wished the delegates would enjoy the Cebuano hospitality during their stay here.

“I hope you will experience more of our hospitality and the surroundings during your stay,” Tetangco said.

Read Next
Capitol to play dinner host to Asean delegates