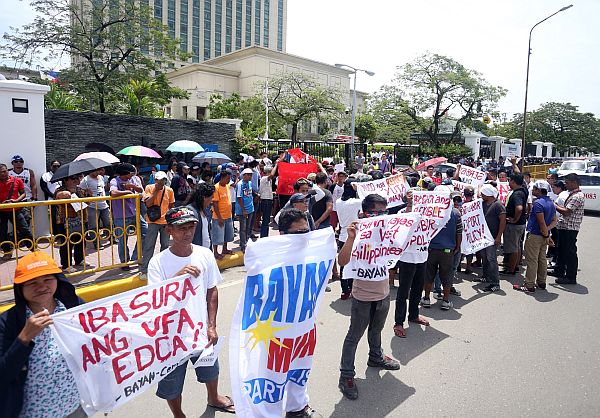 Members of left wing Bayan Muna staged a rally on Wednesday in front of one of the venues for the Association of Southeast Asian Nations (Asean) meetings in Cebu to oppose closer cooperation between the Philippines and China, and the United States of America.
CDN PHOTO/LITO TECSON

AT least 30 members of a militant group staged a short protest rally at past 10 a.m., Wednesday, in front of a posh hotel at the North Reclamation Area, one of the venues of the Association of Southeast Asian Nations (Asean) summit meetings in Cebu City.

Members of Bayan Muna-Visayas gathered to oppose any moves for the Philippines to join hands with the United States and China.

“These two countries continue to impose themselves upon the Philippines by dictating policies that change the country’s economy, politics, culture, and military programs,” said Jaime Paglinawan, the group’s coordinator.

“About P15 billion has been spent by the Philippines to host the AseanSummit. It appears that our country kneels down to imperialist nations even if their policies don’t benefit the vast majority of Filipinos,” he added.

“Anyway, they have not been unruly,” Doria said.

About 30 meters away from the militant group, members of the PNP Civil Disturbance Management unit were deployed.

Doria said that while Bayan Muna did not have a permit to hold the rally, they allowed the group to gather outside the Asean venue since Paglinawan promised they would peacefully leave the place after a short program.

The program lasted only fifteen minutes.

Chief Supt. Noli Taliño, director of the Police Regional Office in Central Visayas (PRO-7), said that there had been no untoward incidents reported in relation to the Asean meetings which started last Monday.

As the rains began to pour, raincoats were distributed to about 3,000 policemen deployed to secure the streets of the cities of Cebu, Mandaue, and Lapu-Lapu during the meetings.

“It’s been raining in the past days. I don’t want our personnel to get sick,” Taliño said.

Areas near the venues of the Asean meetings have been declared no-sail, no-fly zones until Friday to ensure the safety of the delegates and participants.