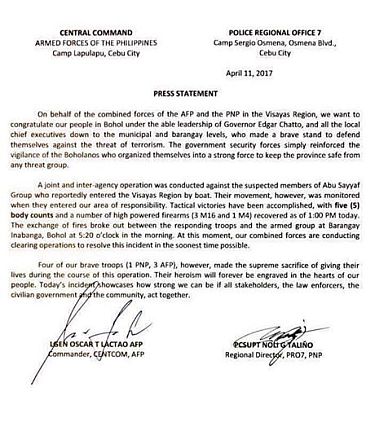 CEBU CITY—Five suspected members of the Abu Sayyaf Group (ASG), three soldiers and one policeman were reported to have been killed in the ongoing firefight in the mountain village of Napo, Inabanga town, Bohol province.

This was contained in a joint statement issued by Chief Supt. Noli Taliño, head of the Police Regional Office in Central Visayas (PRO-7) and Lieutenant General Oscar Lactao, Commander of the Armed Forces of the Philippines (AFP) Central Command, on Tuesday afternoon.

The statement said the government troopers were also able to recover three M-16 rifles and an M-4 carbine from the ASG members as of 1 p.m. on Tuesday.

Jumamoy said Barangay Napo residents reported the sighting of the armed men to the police who immediately sent a team along with some soldiers to the area.

Exchange of gunfire between the ASG members and responding government troops started around 5:20 a.m and was still ongoing as of 3 p.m.

“At this moment our combined forces are conducting clearing operations to resolve this incident in the soonest possible time,” said the joint statement.

Mayor Jumamoy said they had evacuated over 200 families mostly from Barangays Napo and Ylaya to prevent any civilian from getting hit in the crossfire.

“On behalf of the combined forces of the AFP and the PNP in the Visayas Region, we want to congratulate our people in Bohol under the able leadership of Governor Edgar Chatto, and all local chief executives down to the municipal and barangay levels, who made a brave stand to defend themselves against the threat of terrorism. The government security forces simply reinforced the vigilance of the Boholanos who organized themselves into a strong force to keep the province safe from any threat group,” said the joint PNP-AFP statement.

The joint statement also commended the heroism of the fallen soldiers and policeman.

“Their heroism will forever be engraved in the hearts of our people. Today’s incident showcases how strong we can be if all stakeholders, the law enforcers, the civilian government and the community, act together,” the statement added.