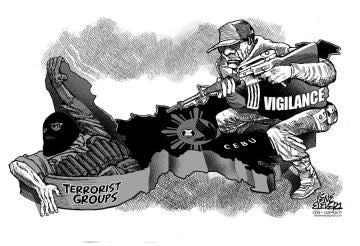 Yesterday’s confrontation between armed men believed to be Abu Sayyaf bandits and government troops in Barangay Napo, Inabanga town in Bohol province came on the heels of a US travel advisory to its citizens and the successful conclusion of the Asean Summit meetings in Metro Cebu.

It also occurred amid the confirmation by Philippine National Police Director General Ronald “Bato” dela Rosa of terrorist groups planning kidnappings in Central Visayas, but he declined to identify which areas are targets and passed off previous reports of terrorist presence in the region as “ generic reports.”

While not a few Cebu officials were taken aback by these developments, particularly Cebu’s tourism stakeholders, they can apparently thank the Asturias police for this recent development.

The relief and transfer of Chief Insp. Albert Quilitorio from his post as Asturias precinct chief to Danao City ordered by Chief Supt. Noli Taliño, Police Regional Office chief, came about after the Asturias police posted on its Facebook page about alleged presence of an Abu Sayyaf bandit in their area.

Whether or not yesterday’s confrontation in Bohol province confirmed the Asturias report, it was apparently enough for the US embassy to pick it up and include it in its advisory to their citizens, a lot of whom had been frequent visitors to Cebu province in the past few years.

“The U.S. Embassy has received unsubstantiated yet credible information that terrorist groups may attempt to conduct kidnappings in Central Visayas, which includes both Cebu and Bohol provinces. U.S. citizens are advised to carefully consider this information as you make your travel plans, and to review personal security plans, avoid large crowds and gatherings, and remain vigilant at all times,” the US embassy travel advisory intoned.

“Unsubstantiated yet credible” information that may have been confirmed somewhat by the Bohol encounter. Police have yet to verify whether these armed men are either Abu Sayyaf bandits or worse, ISIS terrorists as of this writing, but for now, the safety of the residents who were advised to evacuate from the scene of the firefight is a priority.

So far, there has been no cancellation of the Asean meeting scheduled in Bohol province next week; but yesterday’s encounter would give both local officials, organizers and law enforcement agencies serious pause for concern.

We hope yesterday’s armed confrontation would be the last — sadly it would be unrealistic to even think that — armed threat in Central Visayas and that the country’s armed forces and police will be able to contain the armed threat posed by these terror and bandit groups.

The recent successful conclusion of the Asean meetings in Metro Cebu proved that law enforcement agencies with the cooperation of everyone in the community can ensure the security and safety of visitors and residents without infringing and compromising on their movement and civil liberties.