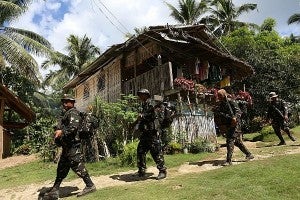 Government troops continue to patrol the barangays of Clarin, Bohol searching for three suspected members of the terrorist group, Abu Sayyaf, who continue to elude arrest after engaging soldiers and policemen in firefights that killed eight of their companions.
CDN PHOTO/JUNJIE MENDOZA

Tagbilaran City, Bohol — A high-ranking policewoman, accused of “sleeping with the enemy” for her alleged romance with a young terrorist, may yet have another police officer working with her to rescue remaining members of the Abu Sayyaf Group (ASG) trapped in the town of Clarin, Bohol.

A text message reportedly recovered from the phone of Supt. Maria Cristina Nobleza gave the female police officer a go-signal to proceed to Clarin town on Saturday, when the suspected ASG members were being pursued by government troops.

“This (alleged involvement of another police official) is one of the possibilities,” said the source who asked not to be identified.

While Nobleza obeyed the order to proceed, the problem, however, was that members of the Philippine Army put up several checkpoints in Barangay Bacani, the site of the firefight in Clarin, the source told Inquirer.

The village had been locked down to prevent the remaining suspected ASG members from escaping.

Nobleza, who was on board a black Nissan Navara pickup driven by alleged terrorist Renierlo Lou Dongon, did not stop at the checkpoint, forcing the soldiers to chase and block the vehicle.

Dongon and Nobleza were later brought to the Clarin police station along with an elderly woman and a 13-year-old boy who were with the two inside the pickup.

Among those recovered from the pickup were bottles of energy drink, canned goods, diving gear, goggles, biscuits, male underwear, T-shirts, shorts for men and medical kits.

On Sunday, the four were brought to Tagbilaran City from Clarin.

Nobleza and Dongon were detained at the Bohol District Jail (BDJ) in Barangay Cabawan in Tagbilaran City, while the elderly woman and the teenager were taken to the Department of Social Welfare and Development (DSWD).

Police said the woman is Dongon’s mother, while the boy is his nephew and the son of Ahmad Santos, leader of the Rajah Solaiman Group and Dongon’s brother-in-law.

The elderly woman, whose name had yet to be released by police, is described to have daughters married to the late Malaysian terrorist Zulkifli bin Hir, alias Marwan; the late Abu Sayyaf leader Khadaffy Janjalani; Abu Solaiman, who was linked to the 2004 Superferry bombing, and Ahmad Santos who is now detained in Bicutan.

“She’s really the hard core mother-in-law of the Abu Sayyaf, isn’t she?” Philippine National Police chief Ronald “Bato” Dela Rosa said of the woman he did not name.

He said the police were still investigating if Nobleza, Dongon, and the unnamed mother-in-law of Abu Sayyaf leaders were trying to rescue the remaining ASG members in Bohol.

At the jail in Bohol, Nobleza was restless and could not sleep, another source said.

Nobleza and Dongon would be taken to Camp Crame anytime to face Dela Rosa.

“I just received instruction from the President and he ordered me to arrest and incarcerate right away Supt. Cristina Nobleza,” Dela Rosa said.

“So, (Nobleza) is really high-risk and many will be interested in her. She needs to be brought here in Crame so that the people of Bohol will be at peace,” said Dela Rosa.

He said the PNP’s Criminal Investigation and Detection Group and Legal Service are preparing the filing of cases against Nobleza.

Among the cases to be filed were disobedience of agents and persons of authority and disregarding the checkpoints as well as harboring a criminal because Dongon had a standing arrest warrant for double murder with attempted murder in Cagayan de Oro City.

In an earlier media briefing, Dela Rosa said the 49-year-old cop has been “romantically linked” with Dongon, who’s in his 20s. (see separate story)
Nobleza is currently the deputy chief of the PNP Crime Laboratory in Davao; while a source privy to the war in Mindanao described Dongon as a “notorious” terrorist in the region.

“He is very witty and knows every bomber in Mindanao,” the source told CDN.

In a 2013 news report, Brig. Gen. Ricardo Visaya, then commander of the Army’s 4th Infantry Division, said Dongon reportedly served as leader of Khilafah Islamiya who was arrested along with an associate by police intelligence operatives in Marawi City on May 11, 2013.

The operation led to the seizure of 29 pieces of blasting caps and other materials in manufacturing bombs. Dongon, however, was subsequently released because the name on the search warrant was that of his younger brother.

Dongon was also allegedly responsible for the bombing of Maxandrea Hotel in Cagayan de Oro.

Chief Supt. Noli Taliño, police director for Central Visayas, said they had pieces of evidence that linked Nobleza and Dongon to the Abu Sayyaf although they had to determine what roles they played in the bandit group.

Among the evidence was a text message from one Abu Sayyaf member asking for help before he was killed with two others by government troops in Barangay Caboy, Clarin on Saturday night — shortly before Nobleza, Dongon, his mother and nephew were arrested in the checkpoint.

Nobleza reportedly threw away the cellphone but this was recovered by authorities, the source told Inquirer.

Dongon, who is also known as “Kudri,” is a bomb expert whose four brothers-in-law were leaders of Abu Sayyaf, Taliño added.
“But the complete information, what their participation (to the bandit group) is still subject of the investigation,” said Taliño.

Taliño did not believe the claim of Nobleza that she was on vacation in Bohol and was on tour in Clarin.

He asked why there were medical kits in the pickup that was registered in her name if the purpose was to tour the province.

A source in the Philippine National Police said Nobleza and her group had been on Panglao Island since April 17, six days after a band of Abu Sayyaf members had an encounter with government troops that killed four members including their leader Abu Rami, as well as three soldiers and a policeman.

Police said Nobleza and her three companions stayed in an apartment in Barangay Looc, at least 100 meters from the police station.
Police said the owner did not suspect Nobleza since she registered her own name.

The apartment is at least 10 meters from the Looc Barangay Hall. There are several houses near the apartment.

A habal-habal driver, who requested anonymity, told Inquirer on Monday, that Nobleza and her companion Dongon who was her driver asked him to take them to the Panglao public market.

“After they bought fish, they returned to the apartment,” the driver said.

Some residents also noticed that their vehicle, a Nissan Navara with plate number FGN-270, arrived late night or early morning at the apartment.

“Lapok ang sakyanan pero wala mi magsuspitsa diin gikan (The vehicle was muddy but we were not suspicious where it came from),” a neighbor said.

They also noticed that an elderly woman and a teenager did not go out of the apartment.

The group was supposed to check out on Saturday and had told the owner of the apartment that they planned to go to Jagna town or Cebu province.

It was on Saturday that the remaining ASG members were spotted in Barangay Bacani, Clarin which resulted in the firefight that killed their local guide, Joselito Melloria, and three other Abu Sayyaf members./(with Benjie Talisic and Inquirer reports)