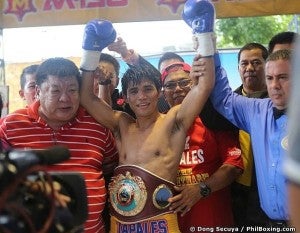 DESPITE losing his WBO world bantamweight title last Sunday for being overweight, Marlon “The Nightmare” Tapales of the Rex Wakee Salud (RWS) Stable is still optimistic he will recapture his belt in no time.

Tapales and his promoter, Salud, trainer Brix Flores, Fernando Ocon and close supporters arrived in Cebu late Monday night from Japan where he scored an 11th-round knockout win over Shohei Omori in what was supposed to be his first title defense.

But the day before the fight, Tapales was stripped of his title for failing to meet the required weight. His title is now vacant.

“I really tried my best to get the weight but my body doesn’t cooperate anymore that’s why I want to apologize to all who supported me. Don’t worry, I will be back stronger and better because we are planning to move up to 122lbs (super bantamweight),” said Tapales.

Salud meanwhile, was still thankful that his ward still won in a fight so close it could have gone either way.

“I want to talk to Marlon about our plans of moving up to the 122lbs division. We don’t have any opponent for Marlon yet because moving up in weight won’t be that easy, we will give him enough time and give him good tune-up matches so that he will ranked higher and fight big names like Cesar Juarez, Magdaleno and other notable boxers in that division,” Salud said.

Salud added that Tapales needs a month or two to recover from his bruises and a deep cut in his right eye.

Tapales revealed he was deeply demoralized when the WBO decided to strip him of his title and was badly exhausted for forcing himself to get the weight.

Tapales weighed 119.75lbs during his first try for the 118lbs limit. He came back two hours later but was heavier at 119.93lbs.

“I was really demoralized but still encouraged myself to win the fight even though I lost the title,” Tapales said. “Omori may have already figured me out after I knocked him out in our first fight. I never thought I could knock him out again because he improved a lot while I was getting slower and tired as the fight went on. But thank God I survived and won.”

Read Next
Iza Calzado takes on daring role in ‘Bliss’