Guardians of the Galaxy Vol. 2: Hip, Hot and Fresh 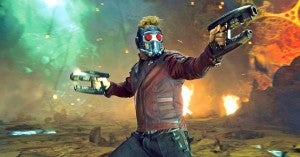 This image released by Disney-Marvel shows Chris Pratt in a scene from, “Guardians Of The Galaxy Vol. 2.” (Disney-Marvel via AP)

HANG tight, true believers —the Guardians of the Galaxy are back.

That’s right; this group of Mighty Marvel intergalactic rejects are back to start a whole new level of mayhem—and yes, save the galaxy once again.

The end of the first Guardians film (in 2014) had our heroes routing the villainous Ronan and placing the Power Gem, one of the powerful Infinity Stones, in the safe keeping of the Nova Corps (on Planet Xandar), with Star-Lord (Chris Pratt) flying away with his team, which included the assassin Gamora (Zoe Saldana), Drax the Destroyer (Dave Bautista), the diminutive walking raccoon known as Rocket (voiced by Bradley Cooper) as well as the plant seedling of Baby Groot (voiced by Vin Diesel).

Did you get all that?

I’m sure it’s all a bit confusing as it should be as when Marvel Studios first announced that “Guardians of the Galaxy” would make its screen debut, people from one end of this planet to another were scratching their heads and asking if the good folks at Marvel had lost their collective minds.

Au contraire, my dear friends, as Marvel once again struck cinema gold with one of the most action-packed (and fun) films to come around in years.

Although none of these “Guardians” have superpowers like the Mighty Thor and his thunderbolts, led by Pratt’s Star-Lord, the Guardians are as hip and hot as molten metal.

The inevitable sequel starts about two months after the first film and finds our team on the gun side — the one that shoots ray beams — against the Ravagers who originally took in young Peter Quill (Star-Lord) as a teenager and blasted off to the Andromeda  galaxy. 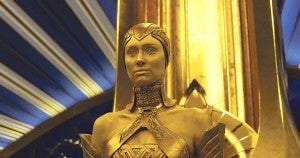 This image released by Disney-Marvel shows Elizabeth Debicki in a scene from, “Guardians Of The Galaxy Vol. 2.” (Disney-Marvel via AP)

Quill eventually betrayed the Ravagers by giving them a plastic toy instead of the Power Gem, which tended to make the Ravager crew just a bit POed to say the least.

And as we see in this continuation, they have taken their immediate anger out on the blue-skinned Yondu (Michael Rooker) who had been the Ravager’s teams leader. Cast out of the Ravagers, Yondu has hooked up with the Guardians and he is a formidable asset with the amazing ability to lightening quick shoot a razor-thin metal dart from his side.

Overall, the main quest for the Guardians this time is to find the true parentage of Star-Lord and it is manifest with the “appearance” of Ego, played by the ever-outstanding Kurt Russell as his father. 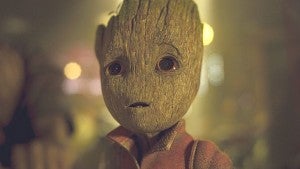 This image released by Disney-Marvel shows the character Groot, voiced by Vin Diesel, in a scene from, “Guardians Of The Galaxy Vol. 2.” (Disney-Marvel via AP)

This extraterrestrial origin of Star-Lord explains why Quill could hold on to the Power Gem at the end of the first Guardians film (and not be vaporized) and use it to disintegrate Ronan.

For you see, Ego is no ordinary person like you and me.

He instead is a living, breathing planet the size of our own Earth, whom in the form of his alter-ego (pardon the pun) Mr. Russell, came to our own terra firma in the early 1970s, hooked up (in the biblical sense) with Star-Lord’s Earth-bound future-Mom and presto changeo, out pops little Peter, a young boy who had no idea he is part human and part “something not.”

Shadowing Ego is the introduction of long-time Marvel Comics superheroine Mantis (Pom Klementieff) who eventually comes to Earth and becomes a long-standing member of the Avengers. 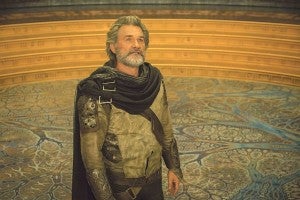 This image released by Disney-Marvel shows Kurt Russell in a scene from, “Guardians Of The Galaxy Vol. 2.” (Chuck Zlotnick/Disney-Marvel via AP)

Written and directed by James Gunn, the “Guardians of the Galaxy Vol 2” once again sets the comic book standard for hip, hot and fresh as newly baked bread right out of the oven. It has a great 1970s soundtrack with songs from Fleetwood Mac, Electric Light Orchestra and even the legendary Glen Campbell, and I thoroughly recommend this film to moviegoers young (well certainly not for anyone under 10 years old) and old of any age.

Quite literally stealing this movie is bite-sized Baby Groot who can only speak three words (”I Am Groot”) and is so cute, I wanted to pull off the screen, bring him back home and present him to my wife Cris as our new golden retriever puppy.

There’s also a nice little romantic “tit for tat” going on between Gamora and Star-Lord to the backdrop of Jay and the Americans’ signature song, “Come a Little Bit Closer.” 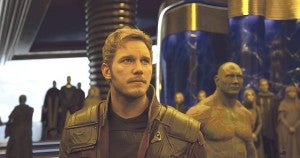 This image released by Disney-Marvel shows Chris Pratt, left, and Dave Bautista in a scene from, “Guardians Of The Galaxy Vol. 2.” (Disney-Marvel via AP)

And of course, there are not one.

But five (count ‘em) secret scenes at the end of “Guardians of the Galaxy Vol 2” that sets up not only the third Guardians film (with cameos from Sylvester Stallone and Ving Rhames) but next summer’s massive “Avengers Infinity War” blockbuster.

Treat yourself to a big box of buttered popcorn, take along your sugary sweet soda and piping “hot” hot dog, sit back and relax ‘cause the “Guardians of the Galaxy” are back, baby!