‘IT’S GOING TO BE QUICK’ 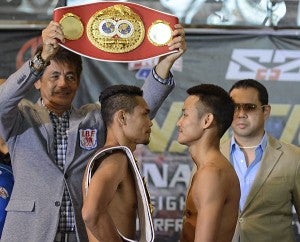 STARE DOWN. Donnie Nietes and Ektawan Nantapech stare at each other during the official weigh-in at the Robinsons Galleria Cebu.

On the eve of his historic attempt to become a three-division world champion, Donnie “Ahas” Nietes remained confident.

In fact, he was confident enough to predict a swift and dominating victory against IBF ranked number four flyweight Komgrich Ektawan Nantapech of Thailand in their showdown for the vacant IBF world flyweight title in the main event of Pinoy Pride 40: Domination tonight at the Waterfront Cebu City Hotel and Casino.

What was his basis for this prediction?

“He couldn’t look me in the eye,” said Nietes after the official weigh-in for their fight yesterday at the Robinsons Galleria Cebu.

“He was kind of afraid during our stare down and I can feel it. And based on my experience, I beat these kinds of opponents dominantly while those who really engage at you on a stare down were those who are very tough to beat like Moises Fuentes, Ramon Garcia Hirales, Francisco Rodriguez and Edgar Sosa.”

There was a bit of tense moments during the weigh-in when he was slightly overweight at 112.4 pounds. Their contracted weight is 112 pounds.

But after removing his boxer shorts, he finally made weight.

Nantapech made weight without a problem.

Still, Nietes was overflowing with confidence despite the minor glitch.

“I’m used to this kind of fights that’s why there’s no pressure anymore for me, it just feels normal for me but I am totally focused for the fight. I have to hide my emotions, my happiness because I never imagined that I am here gunning to become a three-division world champion. For me it feels overwhelming but I have to keep my focus because there’s a job to finish,” Nietes said.