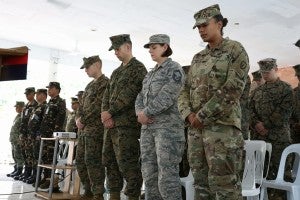 CEBU CITY–As the chase to arrest the three remaining Abu Sayyaf bandits in Bohol continues, some 50 American troops will participate in the civil military exercises dubbed Balikatan in some parts of the Visayas.

But Colonel Medel Aguilar, commander of the Philippine Joint Civil and Military Operations Task Force, said the holding of the Balikatan is not related to any terrorist threats.

“Our activities are intended for humanitarian and civilian assistance and to transfer knowledge and skills on how to react during emergency situations like typhoones,” he said in an interview after the launching of the Combined Joint Civil Military Operations Task Force at the Armed Forces’ Central Command in Cebu City on Monday morning.

Among the activities the soldiers will undertake include the construction of disaster-resilient facilities, classrooms, capability trainings to enhance disaster preparedness, developing good working relationship with the people, and building partnership with stakeholders for civic action programs.

The two-month Balikatan exercises are focused on the islands of Panay, Leyte, and Samar.

Colonel Camilo Ligayo, chief of the Unified Command Staff, said the Balikatan will strengthen the ties between the country and the United States.

“This is the most evident manifestation of a shared commitment between the Philippines and United States’ Armed Forces to move shoulder to shoulder for stability, security, and development,” he said.

“I believe that we are changing lives and making a difference one classrom building at a time,” he added.

Lt. Col. Ryan Scott of the United States’ military engineering department, said they welcome the partnership between their country and the Philippines to improve the lives of Filipinos.

“I am not worried at all (with regard to our security). The Armed Forces of the Philippines (AFP) is outstanding,” he said.

Some members of the AFP continue to look for the three remaining bandits who entered Bohol three weeks ago.

Since April 11, eight ASG members were killed in two gunbattles in the municipalities of Inabanga and Clarin, Bohol.

Among those killed were Mouamar Askali, the leader of the group; bomb experts Abu Sufyan and Edimar Isnain; Joselito Melloria, a native of Bohol who guided the ASG; pumpboat operator Aldimar Taib; alyas Richard; alyas Omil; and an unidentified man.