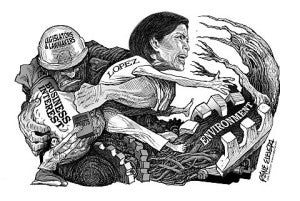 The final rejection of Environment Secretary Gina Lopez isn’t totally unexpected, but it is nevertheless a major disappointment to environmental advocates and the public who expect better leadership from an agency that had largely failed to stop the increasing denudation of the country’s forests and unfettered exploitation of its natural resources.

Lopez was rejected on the grounds that she wasn’t seen as qualified by lawmakers to lead the agency, but if the country can vote a housewife (the late Corazon Aquino) and a college dropout (former convicted president and now Manila Mayor Joseph Estrada) as president, why can’t a sitting president appoint someone who’s not a lawyer or career bureaucrat as a Cabinet secretary?

Besides, some of the honorable members of the Commission on Appointments (CA) who were voted into office aren’t exactly achievers in any field related to their present posts.

Do aspiring candidates for Congress need to be eight-time world boxing champions like Sen. Manny Pacquiao, who chaired the Senate environment and natural resources committee, in order to qualify for candidacy?

What exactly were the qualifications sought by the CA members for the post of environment secretary? That he or she should be sympathetic and subservient to the interests of the mining, logging and coal plant industries?

Upon hearing the news, Lopez blamed the business interests for her rejection, and not a few would agree with her on that assessment. The end result, a 15–9 vote against her, shows just how influential the mining industry lobby was in blocking her appointment.

But it’s not just the mining and logging lobby that was against her. More than likely, it was also the miners, those employed by the mining industry and the loggers whose livelihood was drastically affected by Lopez’s order to immediately shut down the mining firms found to have not complied with regulations.

She should have complemented her closure order with an immediate order for mining firms to contribute to a safety net fund for families affected by the shutdown, and this may have influenced the voting on her appointment.

Would it have made a difference if Sen. Loren Legarda, a known environmentalist, and not Pacquiao, a novice politician who in fairness voted for Lopez, chaired the committee instead?

She could have lobbied better for Lopez’s appointment rather than let the administration allies run their course.

Regardless, Lopez’s rejection may not be the end of the world. But it is a major letdown, and the public may never even know who voted against Lopez since it was secret balloting.

Whoever will be chosen to assume the DENR post will have a tough, if somewhat brief, act to follow in Lopez who showed a firm grasp of one’s mandate and a fearlessness to serve public interest even in the midst of powerful enemies.

Read Next
Trees of UP Cebu