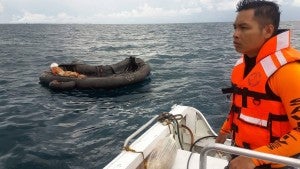 A cargo vessel loaded with iron and metal billets sank in the waters about 2.2 kilometers from the shoreline of Barangay Cansojong, Talisay City, early on Sunday.

All 22 crew members of the vessel were rescued; but the cargo ship left a 25-meter oil sheen on the surface where it sank, prompting the Philippine Coast Guard, local officials and environment advocates to call for vigilance as the sunken vessel still contained nearly 4,000 liters of special fuel, or a mix of bunker and diesel fuel.

At the same time, the cargo ship sank only about 90 feet from the surface and thus posed danger to other passing vessels, according to Dionlett Ampil, commander of Cebu Station for Philippine Coast Guard (PCG).

Ampil said they were still investigating why the vessel MV Fortuner, owned by the Cebu-based Seen Sam Shipping Inc., sank at 6:30 a.m. yesterday.

Talisay City Mayor Eduardo Gullas, reached by phone last night, said he would have the matter looked into since the sunken site is a rich fishing ground for small fishers from the villages of Cansojong, San Roque and Tangke.

Ampil, for his part, said they were waiting for the marine protest to be filed by the shipping company.

“We will invite the ship captain and crew for us to know what really happened,” Ampil told Cebu Daily News.

Ampil said the shipping company has been coordinating with the PCG and has sent divers yesterday at the sunken site.

“The purpose of the divers is for them to identify the position of the sunken vessel,” Ampil told Cebu Daily News.

As of 4 p.m. yesterday, the ill-fated MV Fortuner sank about 90 feet from the water’s surface, he said.

PCG also issued “Notice to Mariners” to warn incoming vessels to avoid the area to prevent a sea mishap since the sunken site is part of the Mactan Channel, a busy passage area for ships coming in and out of Cebu.

Ampil said he would suggest to the shipping company to immediately salvage the ship since it could pose danger to other vessels passing through the area.

MV Fortuner, which had a gross tonnage of 1,474.32, suffered a crack along the midsection of its hull at about 4:30 a.m., according to an initial incident report released by PCG Cebu yesterday.

The report, however, did not indicate what caused the crack although it said that all the vessel’s crew members were transferred to its sister ship, MTUG 38, about 6:10 a.m., more than 20 minutes before Fortuner finally sank.

Ampil said it was Benson Go, the owner of the cargo vessel, who reported the sinking to PCG at 6:30 a.m.

Ampil said that as of 4 p.m. yesterday, the question as to why the ship sank was still unanswered.

As a rule, he said, the PCG should receive within 24 hours from the incident a marine protest from the ship captain, who, in this case, is Edilberto E. Isidor.

Fredirick Alba, the chief mate of MV Fortuner who was reached by phone yesterday, told CDN that they left General Santos City last April 26 and arrived in Cebu on April 30, dropping anchor at the waters off Talisay City.

Alba, however, refused to give further details to CDN because of the ongoing investigation into the sea mishap by the PCG.

He also did not say what the ship’s cargo was or where the cargo was bound for.

Ampil, however, confirmed to CDN that the cargo vessel was loaded with iron and metal billets, which are raw materials to produce steel bars, but they still have to figure out its volume.

He said PCG also still has to identify if there were other cargoes loaded in the ill-fated cargo vessel.

MV Fortuner listed its port of registry as Cebu, with the owner, Seen Sam Shipping Inc., listing its office’s base in Barangay Talamban, Cebu City.

Ampil said the PCG placed oil spill boom yesterday morning after they received an information from personnel of a passing vessel, MV Paros Sess, that an oil sheen was sighted in the area.

“Initial information was a 25-meter oil sheen spotted in the sunken site, there were bubbles and rainbow colors seen,” Ampil added.

The Marine Environmental Protection of PCG then conducted shoreline inspection in Barangays Cansojong, San Roque and Tangke to check if oil has reached the shorelines in those areas.

So far, as of 4 p.m. yesterday, the shorelines of these three barangays were negative of oil spill coming from MV Fortuner, said Ampil.

According to Ampil, MV Fortuner had 4,000 liters of special oil, a combination of bunker and diesel, when it sank.

But the PCG-Cebu could not identify the volume of oil coming out from the ill-fated cargo vessel.

Ampil said he would suggest to the company to siphon the oil out of the sunken ship to prevent an oil spill.

“Although we have contained the oil sheen as of this time but we also need to make sure that there will be no further (environmental) damage in the future,” he told CDN.

Alan Poquita, the regional director of Bureau of Fisheries and Aquatic Resources in Central Visayas (BFAR-7), told CDN by phone yesterday that they would find out today the direction of the oil sheen and whether or not it has harmful effects on the marine resources in the area.

Vince Cinches, the Oceans Campaigner for Greenpeace Philippines, on the other hand, told CDN that it is important to immediately contain the oil in the area.

“There is also need to assess the extent of the (sheen), and to come up with a more appropriate measures,” especially since it could cause marine damage, he said.

In 2013, an oil spill was also experienced in Talisay City after the collision of MV St. Thomas Aquinas of 2Go Shipping Lines and Sulpicio Express Siete of Philippine Span Asia Carrier Corp (PSACC) at Lauis Ledge in Talisay City along Mactan Channel.