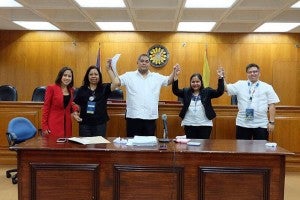 Ian Christopher Escario has been formally proclaimed by the Commission on Elections (Comelec) as the new mayor of Bantayan town, Cebu in a simple ceremony at the Comelec office in Intramuros, Manila on Monday morning.

In a phone interview, Escario said he will also be taking his oath of office before Court of Appeals (CA) presiding justice Andres Reyes, Jr. in afternoon.

Escario flew to Manila early on Monday in order to catch his scheduled proclamation at 10 a.m.

Prior to the ceremony, he said lawyers of disqualified Bantayan Mayor Arthur Despi showed up at the Comelec to try and stop his proclamation saying that they have already asked the Supreme Court (SC) for a Temporary Restraining Order (TRO) on the proclamation.

(The Special Board of Canvassers held a meeting and they were heard. They were asked if they had a TRO but they could not show anything. So, we pushed through with the proclamation.)

Escario was proclaimed after the Supreme Court upheld an earlier resolution by the Comelec First Division to disqualify Despi. This, after they ruled that there was a technicality over Despi’s certification of nomination and acceptance (CONA) which resulted to the cancellation of his Certificate of Candidacy (COC).

For his part, Despi said he reported to the municipal hall of Bantayan as if nothing happened.

He said he told the municipal hall employees after their flag raising ceremony on Monday morning that it is just a normal day of operations in the municipality.