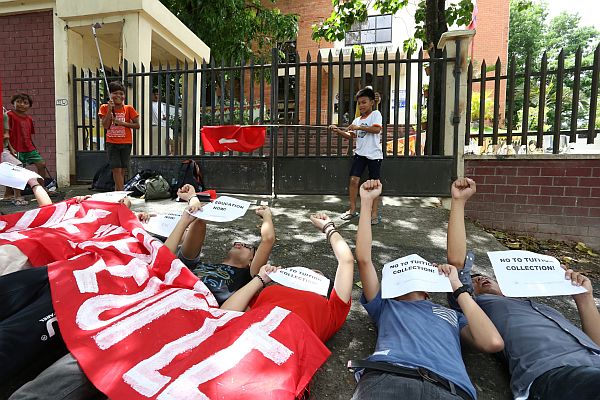 Militant student groups stage a protest in front of the Commission on Higher Education in Cebu City to complain against the Implementing Rules and Regulations (IRR) of the free tuition fee program which only covers students from very poor families.
CDN PHOTO/JUNJIE MENDOZA

The groups said that the proposed IRR does not address the issue of commercialization of education because even though students will be paying less in tuition, they still have to pay skyrocketing school fees in the form of laboratory fees, miscellaneous fees, energy fees and others.

The policy was crafted by CHED and the Department of Budget and Management (DBM) for the state universities and colleges for school year 2017-2018.

University of the Philippines (UP)-Cebu students and youth groups Anakbayan and Kabataan Partylist denounced the DBM and CHED draft of the IRR.

Cj Matarlo, Kabataan Partylist Cebu coordinator, said that the draft IRR only covers students whose families are under the 4Ps program and those who are already under the student financial assistance program.

“There are no options given by CHED and DBM to non-beneficiaries of the student financial assistance program aside from waiting for extra slots which are not even sure,” Matarlo said in Cebuano.

She noted that based on the guidelines, it would seem that students really have to prove that they really come from very poor families to have quality free education instead of equal quality and free education for all.

During the picket staged by the students, Dr. Pedro Fudolig, CHED-7 chief education program specialist, talked to the protesters.

Dr. Carlyn Dela Peña, CHED-7 Education Supervisor, also gave copies of the free-tuition guidelines and the joint memorandum circular No. 2017-01, dated April 20, 2017, to two of the representatives, and asked them to submit their position paper on Friday.

The students’ position papers will be forwarded to the CHED central office for their review.

Read Next
Davide calls for sobriety over Bantayan mayoralty decision