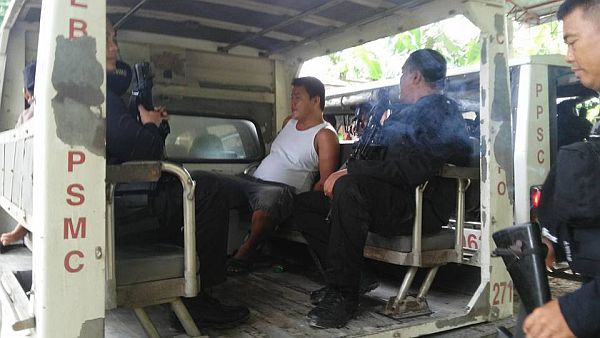 A village chief in Ronda town was rudely awakened early morning last Monday by a joint police team that swooped down his house to serve a search warrant issued by Regional Trial Court Judge Jerry Dicdican.

Tupas Barangay Captain Eugene Miñosa, 38, was shocked to learn that he was suspected of possessing unlicensed firearms, ammunition and explosives after Supt. Joie Yape of the Provincial Intelligence Branch (PIB) read to him the contents of the search warrant.

Miñosa initially vehemently denied owning firearms or explosives. But when the police team began the search, starting with the master’s bedroom, they found a .45 caliber pistol and bullets inside a black cloth bag and packs of suspected shabu inside a black leather case.

The search was witnessed by Barangay Councilor Pacita Landiza and Miñosa’s wife, Ruby.
Miñosa later admitted owning the firearm and told the police that he also owned a KG-9 pistol but sold it. Police found a silencer for a KG-9 pistol.

He said the firearms were for his safety.

The village chief said he is a victim of political rivalry, adding that one of his relatives is behind his arrest.

His wife, Ruby, denied any knowledge of any illegal activities her husband may have been involved in, saying she is at home most of the time to take care of their children, aged 9, 7, 4 and 1.

Even the commander of the Ronda Police Station, Senior Insp. Bonifacio Lucerna, said Miñosa is a good person but confirmed receiving reports about the village chief selling drugs about a month ago.

Lucerna said this was the reason why they sent an asset to buy shabu from him, but the attempted buy bust turned negative.

The police chief said he was not aware that Miñosa owned an unlicensed firearm, and he agreed with Miñosa’s claim that what happened could be because of political rivalry.

The police officer in charge of the barangay, PO3 Josephus Faunillan, confirmed receiving reports about Miñosa being involved in alleged illegal activities, but upon verification, the information turned out negative.

He said there are around 400 voters in Barangay Tupas. Six persons surrendered — three of them drug pushers, the other three users.

Supt. Yape, however, said they had been monitoring the activities of the village chief after which they applied for a search warrant. He said there are five other barangay captains being monitored by the police, making them the next subjects of a search warrant.