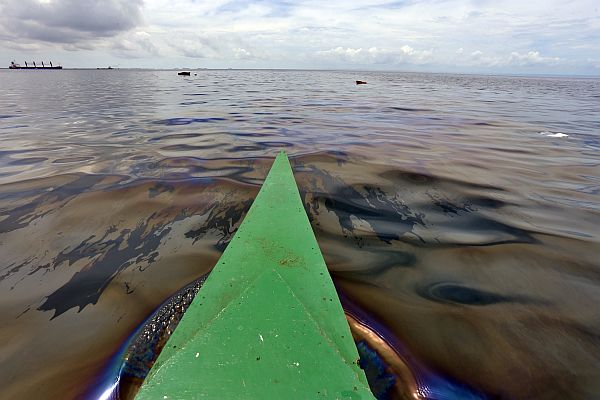 Oil blotches and sheen are observed near the sunken site of the MV Fortuner. Talisay officials want ship owner to siphon the oil inside the ship to prevent an oil spill. (CDN PHOTO/JUNJIE MENDOZA)

Five days after the ill-fated  sank off the waters of Barangay Cansojong, Talisay City, no marine life has been affected by any oil spill so far.

But Alvin Santillana, head of Talisay City’s Disaster Risk Reduction and Management Office, said officials should not take any chances and believed that the vessel’s oil should immediately be siphoned to prevent future damage.

“Motaya baya ng tanke. (The tank will rust). It is still the company’s liability to siphon the oil there,” Santillana told Cebu Daily News.

“I just want to get his commitment and assurance that they will siphon the oil since we just want to protect marine life in Talisay City,” Santillana said.

It also carried 4,000 liters of special oil, a combination of bunker and diesel fuel.

A survey conducted by the Marine Environment Protection Unit (MEPU) discovered that the service tank of the vessel remained sealed even as the vessel suffered a crack at its midsection before it sank.

Dionlett Ampil, commander of the Philippine Coast Guard (PCG) Cebu Station, said that they could not yet say what caused the sinking pending further investigation into the mishap.

Ampil also said that as of yesterday, no oil spill nor oil sheen was detected at the sunken site.

“PCG will continue to monitor the area until the siphoning and salvaging (of the vessel) will be finished,” he said.

PCG has issued a survey permit for divers to assess ways to siphon the remaining oil today.

“After the survey, siphoning will be done,” Ampil told CDN.

A “Notice to Mariners” was earlier issued by PCG to remind vessels where MV Fortuner sank to prevent a sea mishap although officials had yet to determine the exact position of the shipwreck.

“Di pa ma-identify yung position ng shipwreck kasi medyo madilim (We still could not identify the position of the shipwreck because it is a bit dark),” Ampil said.

Read Next
Taliño welcomes Año as new head of DILG