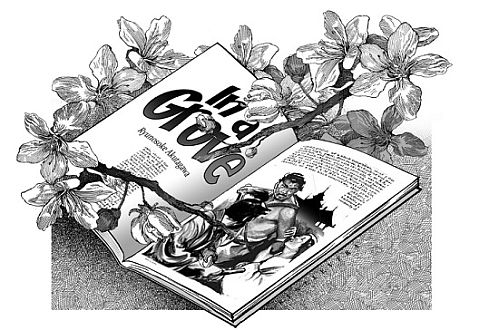 Most literature textbooks include a short story, entitled, “In a Grove,” by a Japanese author, Ryunosoke Akutagawa.

It first appeared in the January 1922 issue of a Japanese publication. The legendary director, Akira Kurosawa, based his award-winning movie, “Rashomon,” on it.

“In a Grove” tells of a woodcutter who finds a dead body in the woods.

In his report, he states that the man died of a sword wound in the chest, and concludes that, judging from the clutter of leaves around the body, there must have been a violent struggle.

A travelling Buddhist monk narrates that, one day before the incident, he met a man accompanied by a woman on horseback. The man had with him a sword, a bow and a black quiver.

A bounty hunter claims to have captured a criminal named Tajomaru, who he suspects was the killer, because he was carrying a bow and a black quiver and riding a horse, which threw him off, injuring him.

But Tajomaru did not have the dead man’s sword.

An old woman comes forward, identifying herself as the mother of the missing girl, Masago, who was married to the dead man, Takehiro, a samurai.

She asks the police to find her daughter.

Tajomaru confesses to having killed Takehiro. He saw Takehiro and Masago in the forest and decided to rape the girl.

To lure him away, he told Takehiro about a buried treasure, and then tied him to a tree and stuffed his mouth with leaves.

When she saw this, Masago attacked Tajomaru with a dagger, but the latter knocked the dagger off her hand, and then forced herself upon her.

After the rape, Masago begged Tajomaru either to kill her husband or kill himself because she could not live with two men who knew her dishonor.

Not willing to take advantage, Tajomaru untied Takehiro and had a sword fight with him, during which Masago ran away.

Tajomaru killed Takehiro and took the latter’s sword, bow and quiver and Masago’s horse. He sold the sword before his arrest by the bounty hunter.

Masago’s account of the incident varies from that of the others.

In tears, she narrates that after the rape, Tajomaru fled, leaving her alone with her husband still tied to a tree.

She asked Takehiro to die with her, to which he agreed, and so he thrust the dagger into his chest.

She then ran deep into the forest and attempted to kill herself several times, but lost her nerve.

Takehiro’s ghost (speaking through a medium) gives his version of the incident.

He says that, after the rape, Tajomaru persuaded Masago to leave her husband and be his wife.

Masago agreed on one condition—he would have to kill Takehiro first.

This angered Tajomaru, who asked Takehiro if he should kill the shameful woman instead.

When she heard this, Masago escaped into the forest.

Tajomaru untied Takehiro’s rope and himself ran away. In his despair, Takehiro picked up Masago’s dagger and plunged it into his chest.

Which of these versions is correct? Who killed Takehiro?

The short story raises questions about the nature of truth.

Traditional philosophy tells us that what we say is true if it corresponds to the way things really are.

(Somebody calls truth as a “word-to-world” relation.)

Truth cannot be subjective or relative, however, otherwise nothing would be known for certain.

The Gospel of John relates that Jesus identified himself with the truth, “I am the way and the truth and the life.” How then is Jesus the truth?

In the prologue to his Gospel, John writes that Jesus is the Word, which is God—the Word that was made flesh and became man.

Thomas Aquinas explains this, “Truth belongs essentially to him because he is the Word.

Now truth is the conformity of a thing to the intellect, and this results when the intellect conceives the thing as it is…

Yet, although our word is true, it is not truth itself, since it is not true of itself but because it is conformed to the thing conceived…

In the end, this requires faith. Yann Martel’s novel, “Life of Pi,” points this out.

After a shipwreck, Pi, an Indian boy, survived 227 days on a lifeboat in the Pacific Ocean.

When he reached land, during an inquiry into the shipwreck, he told the officials from the Japanese Ministry of Transport that he was with animals, including a Bengal tiger, on the lifeboat.

The officials did not believe him. Finally, Pi asked them which story they preferred, the one with animals or the one without animals.

They chose the one with animals. Pi thanked them and said, “And so it goes with God.”