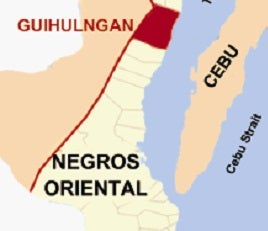 Barely 24 hours after the province of Bohol was cleared of the Abu Sayyaf terrorist group (ASG), law enforcement authorities are now shifting their attention to Negros Oriental.

This after a group of nearly two dozen armed men and a woman were sighted in Guihulngan City of the province yesterday morning.

(More or less they were 20 armed persons, including a woman. They had firearms with them.)

Arpon said he immediately led a police team to the area, but they were not able to catch up with the armed group.

He said that he and Guihulngan Mayor Guido Reyes were instead able to talk to the informant.

(They asked directions from the informant as to the safe path to the mountain area.)

After he gave the directions, the informant said that the armed men immediately headed to the mountainous part of Basak.

Guihulngan City is located on the northern part of Negros Oriental, or about 130 kilometers north of Dumaguete City.

Arpon said that around 10 a.m., they received reports that there were also armed men sighted in the hinterland village of Balogo of the same city.

But they still have to verify the reports, he added.

Arpon said that right after they received the report, he called the Armed Forces of the Philippines unit assigned in the province, the 79th Infantry Battalion.

However, he added that until past 10 a.m. yesterday, the military has not sent troops to check the area.

(Their troops did not come. They reasoned out that they do not have a quick reaction team. They only have the intelligence team in the camp and enough personnel left to guard the camp.)

Believed to be NPA

As of this writing, Arpon admitted that they could still not confirm as to the identity of the armed men.

He said they were still verifying if the armed persons belong to the dreaded Abu Sayyaf Group or New People’s Army (NPA) guerrillas.

But based on the statement of the former Cafgu member, Arpon said there is a big possibility that those armed men are with the NPA.

(Because they went up to the mountains. There is a possibility that they are regrouping here in Negros. Since they arrived on the island using a pump boat, it means they came from another province.)

A source from Military Intelligence Group (MIG) said that those armed men could be members of the South East Front sa Komiteng Rehiyon-Negros (SEF-KRN).

The source said that those armed men mostly likely came from Bohol, which remained tightly guarded against the presence of armed men in the aftermath of the entry of the Abu Sayyaf bandits on the island.

According to the MIG source, it was likely that the NPA rebels were laying off Bohol for the time being and might be regrouping in Negros.

The source said that sometime last week, military troops had an encounter with the leftist elements in Santa Catalina town in Negros Oriental.

In Bohol, military troops are still in many areas in the province even as they have slowly withdrawn from Pangangan Island in Calape town, where the last two ASG members were killed.with reports from Nestle L. Semilla

Read Next
DPS: P50M for compactor truck rental is needed