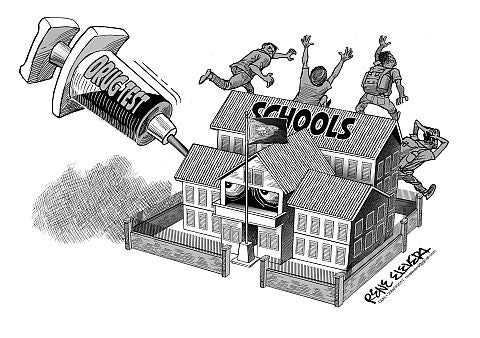 With the school season fast approaching, the Department of Education’s (DepEd) proposal to conduct random drug testing on high school students, teachers and school personnel may be par for the course under the current administration, but it’s not without complaints.

The militant Alliance for Concerned Teachers (ACT) Cebu chapter supposedly questioned the plan, saying a random drug test should include all teachers and not just teachers suspected of drug use.

In that sense, they are right but it seems the DepEd is making good on its commitment to conduct random drug tests that will include students.

Private schools are exempted since they have their own policies on drug tests, said Education Secretary Leonor Briones.

While the parents will be informed since the students are minor, the likelihood that some of these students knowing how best to avoid being detected for drug use is also considered.

DepEd has acknowledged that some of its teachers were found to have used drugs and peddled drugs to their students. One such teacher in a town in Cebu province operated a drug den that happened to be located near a police precinct.

Conversely, some of the more enterprising students were also tapping teachers desperate for cash to help them peddle drugs to their customers who include fellow students.

These drug-dealing teachers may not be in the league of a Walter White, that biochemistry teacher in the just-concluded Emmy award-winning Netflix series “Breaking Bad” that started a drug empire, but they don’t need to be.

But we’re digressing here. The focus is on drug testing where schools and the DepEd can find out for themselves if their teachers and students are clean or not and start from there.

We hope that in the conduct of random drug tests that the confidentiality clause will be honored by those conducting the drug tests since any leak of positive test results can seriously damage a teacher’s or a student’s reputation.

A barangay chairman in Cebu City found that out to his chagrin and alleged that it was a form of political harassment. In the case of students and teachers, an initial positive drug test will be followed by another confirmatory test to be determined by them in an unspecified date.

With the random drug test, not only will students and teachers be kept honest but those using and peddling drugs may be forced to reform lest they be found out and suffer the full consequences of their actions.

Read Next
The P2.9B IPO boost