Marawi residents have left the city in droves 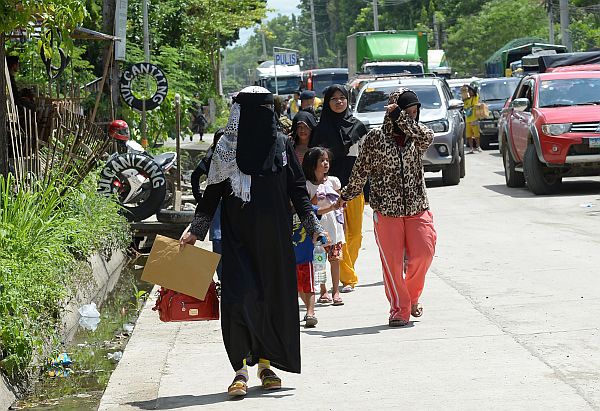 Residents fleeing from Marawi, where gunmen who had declared allegiance to the Islamic State group rampaged through the southern city, walk past a checkpoint at the entrance to Iligan on the southern Philippine island of Mindanao on May 24, 2017.
Philippine President Rodrigo Duterte warned on May 24 that martial law would be “harsh” and like a dictatorship, after imposing military rule in the south of the country to combat Islamist militants. / AFP PHOTO / TED ALJIBE

RESIDENTS of Marawi City have left the city in droves, clogging road with cars, trucks and people on foot heading for Iligan City, some 30 kilometers away.

They want to take shelter from the ongoing fighting between state troops and elements of the Islamic militant Maute Group who have taken hold of some parts of the city.

Presidential Peace Adviser Jesus Dureza, speaking before members of the Philippine Press Institute meeting in Manila on Wednesday, said that authorities welcomed the exodus because if residents would remain in the city, they could get caught in the crossfire or might be used as human shield in the ongoing fight.

Dureza said there was no clear estimate yet as to how many left Marawi (population: 200,000).

But so far, he said, the Department of Social Welfare and Development in Iligan prepared food packs for about 20,000 families who were estimated to have initially fled from Marawi.

Well-meaning residents of Iligan and civic groups also bonded together to provide assistance to those fleeing from Marawi City, Dureza said.

According to Dureza, the Maute Group has control over two strategic bridges in the city, the perimeter of a hospital and certain areas he declined to name.

Over a thousand soldiers and policemen have been sent to Marawi and its surrounding areas as of noon on Wednesday.

“Expect something big to happen,” he said, but declined to elaborate.

President Duterte, who arrived at the Ninoy Aquino International Airport past 5 p.m., was set to meet with key advisers and top police and military officers.

President Duterte cut short his visit to Russia to fly back to the Philippines upon learning what happened in Marawi.

Read Next
Cebuanos asked to be vigilant amid Marawi siege